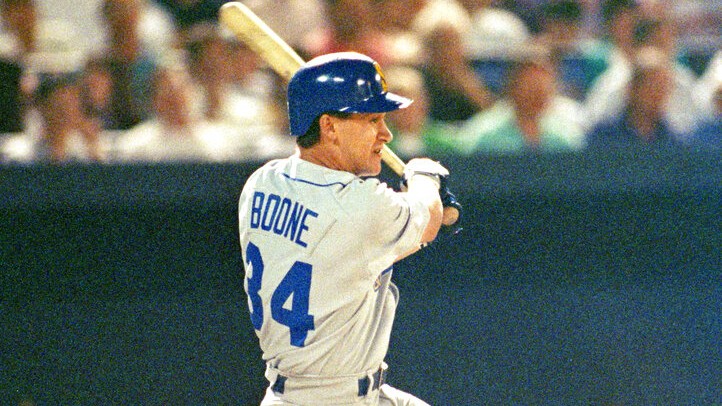 August 19, 1992, 30 years ago today: Rookie second baseman Bret Boone, grandson of Ray Boone and son of Bob Boone, becomes the first third-generation major leaguer when he breaks in for the Seattle Mariners against the Baltimore Orioles at Camden Yards. Bret had a hit in his first MLB at-bat, drove in a run, and scored twice in his debut as the M’s won, 10-8. His dad Bob spent 19 seasons as a big league catcher and later managed the Kansas City Royals and Cincinnati Reds. Grandpa Ray was an infielder for six different teams from 1948-60. And did you know? The Boones are descendants of legendary frontiersman Daniel Boone.

After subsequent stints with Cincinnati, Atlanta and San Diego, Bret Boone returned to Seattle in 2001, leading the Mariners to their best season ever with 116 wins. He hit 37 home runs, a Mariners record for a second baseman, and knocked in 141 runs. Boone’s career peaked alongside Puget Sound, as he clubbed 127 homers over five years. But midway through the 2005 season, with his numbers in a steep decline, the Mariners cut him loose. Boone finished that season with the Twins, and he retired the next spring.

Younger brother Aaron Boone debuted in the majors with the Cincinnati Reds in 1997 and was teammates with Bret for two seasons. The duo made history on the last day of the season in 1998 when they were part of the first major league infield ever to be comprised of two sets of brothers. Bret started at second base and Aaron at third, while Reds star Barry Larkin was at shortstop, and brother Stephen Larkin played first.

Although he’s currently the manager of the New York Yankees, Aaron Boone only spent one year with them as a player. But Boone’s most famous at-bat came as a Yankee in 2003. In Game 7 of the American League Championship Series, he hit an 11th-inning walk-off home run to beat Boston 6-5 and extend the “Curse of the Bambino.” The Red Sox, of course, turned the tables on the Yanks the following season, but by that time Boone was with Cleveland and was inactive after tearing his ACL during the offseason.