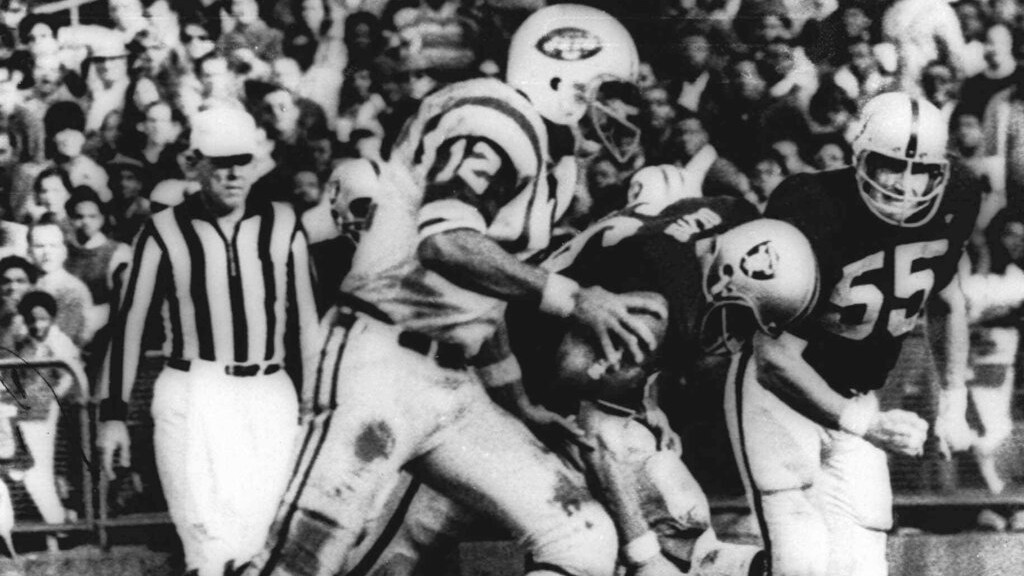 November 17, 1968: In pro football’s most notorious TV game of all-time, the New York Jets take a 32-29 lead on a field goal with 1:05 remaining in the fourth quarter in an AFL showdown against the Raiders in Oakland. The game was running long.Nevertheless, NBC then cut away to show “Heidi”, a two-hour children’s special. At 7 p.m. Eastern, there he was. An old man with a hiking stick, walking in the Alps on the screen where Joe Namath and Daryle Lamonica were supposed to be throwing footballs.

NBC executives had frantically tried to reach the control room to instruct it to stick with the game, but word never got to the button-pushing technicians. NBC’s phones in New York just about blew up. All the while, the Raiders were scoring twice in the final minute to win, 43-32. At that time, there was no way for fans to find out who won. The controversy forced an official network policy change—and pro games have been shown in their entirety ever since. (By the way, the Raiders won the battle, but the Jets won the war. New York beat Oakland six weeks later in the AFL Championship Game and went on to the epic upset of the Baltimore Colts in Super Bowl III.)

The next evening on the Huntley-Brinkley Report (now NBC Nightly News), David Brinkley didn’t try to hide anything. He repeated NBC’s profuse apology and said 10,000 people called the network’s New York switchboard—so many that it blew out the fuses. The final minute of the game was then shown in its entirety on the newscast, with Lamonica hitting Charlie Smith with a 43-yard touchdown pass and the Raiders recovering a fumble in the end zone on the ensuing kickoff for another TD.

Historians will tell you that the “Heidi” game proved to networks once and for all the popularity of pro football (not to mention the allure of the old AFL). In 1997, it was voted the most memorable regular season game in pro football history. Brinkley’s kicker on that Monday evening: “It got to be so bad that when people called NBC to complain, and they couldn’t get through because the switchboard fuses were blown, they called the police and threatened to blow their fuses.” Brinkley followed with his and Huntley’s time-honored signoff. “Good night, Chet.” “Good night, David. And good night from NBC News.”