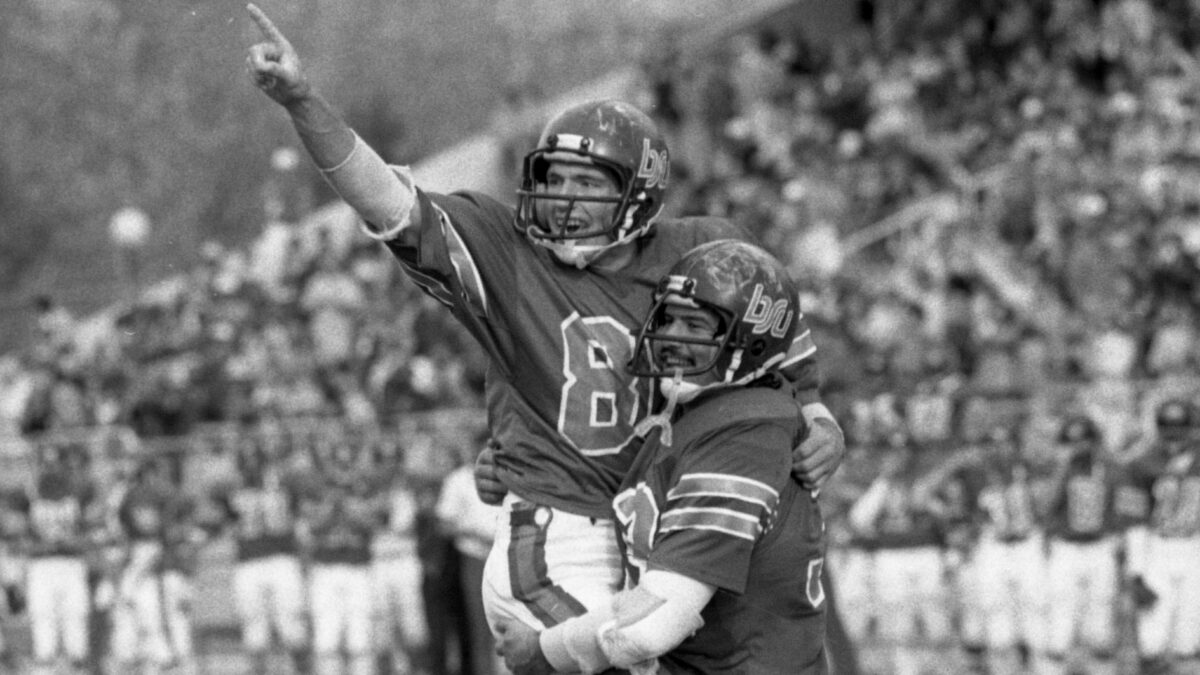 November 8, 1980: In a showdown for the Big Sky lead at sold-out Bronco Stadium, two of the greatest running backs in Big Sky history face off against each other: Boise State’s Cedric Minter and Nevada’s Frank Hawkins. Hawkins carried the load for the Wolf Pack and rushed for 141 yards, but Minter made the most of his carries—notching another 100-yard day (with 124) and scoring what proved to be the winning touchdown in a 14-3 BSU victory. The Broncos would go on to win the Big Sky and the Division I-AA national championship.

Ever since the turf was green in what is now known as Albertsons Stadium, the action has happened on Lyle Smith Field. It was during this Boise State-Nevada game that the field was dedicated to Smith in front of a sellout crowd of 20,682 fans. Smith, the Father of Bronco Football, was in his final year as athletic director at Boise State and was set to retire the following June. He was honored for his 20 seasons of incomparable success as coach of Boise Junior College and for advancing the Broncos from the NAIA to NCAA Division II to Division I-AA as the first AD during the institution’s era as a four-year school.

The Boise State-Nevada rivalry was young at the time. But all of them were, as the Broncos were in just their 13th season as a four-year program. The first game against the Wolf Pack came just two weeks after the debut of the Boise State-Idaho rivalry in 1971. The Broncos won that game on the road 17-10. A 23-21 loss in Reno on a controversial call on the game’s final play was Boise State’s only regular-season blemish in 1973. That was a non-conference game, and the Broncos would be undefeated Big Sky champions. The Pack stunned Boise State again 28-10 in 1977, but that was also a non-league matchup for the unbeaten Big Sky champs.

The series evolved in 1979, when Nevada joined the Big Sky. The tradition of Bronco fans shuttling across the desert to Mackay Stadium began then, when 4,000 Bronco faithful turned out for a 28-27 Boise State win in the second-to-last game of the season. And the energy was high in Boise for the 1980 game. This Saturday, the schools play for the 45th time, with the Broncos holding a 30-14 all-time advantage. Boise State has won 16 of the last 18 in the series. One of the two losses, of course, was the 41-31 setback to Nevada last year on the blue turf.