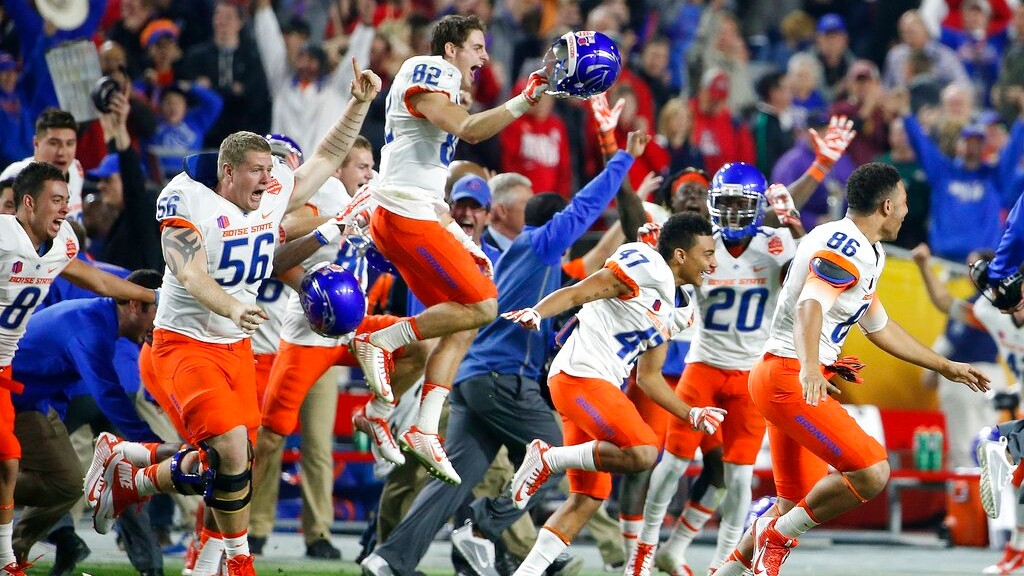 It’s brought up periodically (maybe more than periodically): Chris Petersen and Bryan Harsin won Fiesta Bowls in their first season at Boise State. Your serve, Andy Avalos. That, of course, is unfair to Avalos, because going undefeated in your first year is a big ask—and that’s what he would have to do. But here’s one similarity between Petersen’s and Harsin’s first teams and that of Avalos: following up frustrating seasons. The Broncos underachieved in 2020, finishing 5-2 in the COVID-affected campaign. The 2013 team, Petersen’s last one, went 8-5 as the wind kind of went out of Boise State’s sails. And the year before Coach Pete took over, the Broncos were 9-4 in Dan Hawkins’ final season following a three-year stretch that saw them go 36-3. There’s a hunger after that 2020 Mountain West championship game.

Speaking of Petersen, he will be a part of Fox’s Big Noon Kickoff show this season, according to Andrew Marchand’s sources. If that’s the case, it will be on Petersen’s terms. “Petersen will mostly appear in studio when the regular crew is on the road at games,” tweeted Marchand, the New York Post sports media columnist. He said ESPN also had some interest in Petersen for some studio work. Can’t imagine him commuting to Bristol, though. This will work on Fox. As much as he professes to detest press conferences, Coach Pete can be as funny and engaging as he wants to be when he’s in his element. This is good for Boise State, as Petersen is still best-known nationally for his years on the Blue.

WILLIAMS WORKS IT EVERY WHICH WAY

Avery Williams is 10 days away from his first pop quiz with the Atlanta Falcons, a preseason game against Tennessee on August 13. Falcons play-by-play man Wes Durham was on Idaho SportsTalk Monday and said the former Boise State star is looking good in training camp. “He’s obviously involved in some of the special teams,” said Durham, while adding that Williams is “one of 3 or 4 guys” slated to return punts in the preseason. But, since Williams is the whole package on special teams, he’s also getting other work on the kick cover and return teams. But of course, considering Williams’ pedigree. “He may not be the return guy, but he’ll definitely be on the field,” Durham said.

WRIGHT GETS A SUMMER NBA SHOT

Borah High grad Isaiah Wright has a spot on the Utah Jazz summer league team. Wright, who played two years as a Utah Ute before transferring to San Diego for his final two college campaigns, was in the G League with the Stockton Kings for some of the 2019-20 season, averaging 5.3 points in seven games. He doesn’t appear to have played hoops last season. Wright led Borah to the 2013 5A state championship and was named Idaho 5A Player of the Year.

WHITE BACK WHERE HE BELONGS

One thing the Idaho Steelheads have had that the Boise Hawks haven’t is roster longevity, meaning guys who stick around for a while and connect with the community. The Hawks may develop some now that they’re an independent. The Steelheads roll on, as A.J. White will return for his fourth season in Boise. Interestingly enough, with no Steelies hockey last season, White played for the rival Utah Grizzlies, posting 15 goals and 25 assists. But he’s all about the Steelheads. White has served as captain for two consecutive seasons and has missed only two games during the regular season and postseason combined in his Idaho career.

The Boise Hawks broke open a 2-2 game with a run in the seventh inning and three more in the eighth to top Idaho Falls 6-2 Monday night at Memorial Stadium. Second baseman Jason Dicochea has been clutch all summer, and it was his two-run single in the eighth that put it away against the Chukars. The Hawks took four of six in their series against Idaho Falls, one of the top teams in the Pioneer League this season with an overall record of 43-20.

As College of Idaho and coach Mike Moroski enter their eighth season since the 2014 revival of football, they are more than over the hump. For the third straight season, the Coyotes will open the season ranked in the NAIA Preseason Coaches’ Top 25, coming in at No. 19 in the poll released Monday. One other Frontier Conference team was ranked: rival Eastern Oregon at No. 18. C of I opens fall camp on Wednesday.

August 3, 2011, 10 years ago today: The name “Humanitarian” disappears from Boise’s bowl game for good, as the organization announces a six-year deal with the Idaho Potato Commission to rename the game the Famous Idaho Potato Bowl. The game was known as the Humanitarian Bowl for 11 of its 14 previous seasons, the only exception being the MPC Computers Bowl moniker from 2004-06. Despite Boise State’s move to the Mountain West that year, the Famous Idaho Potato Bowl would remain affiliated with the WAC for two more seasons. 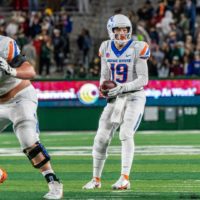 Doing things a different way at Boise State in 2018