As Boise State’s Senior Night approaches tomorrow, let’s check out two of the more interesting journeys. First, there’s the quietly popular Thomas Sperbeck, the only current Bronco elected by fans to the 30-Year All-Blue Team. Sperbeck was signed as an “athlete” in February of 2013. Chris Petersen and his staff weren’t sure where they were going to put him, but they knew he was good. Sperbeck could just as easily have ended up at safety, but coaches noted his soft hands and disciplined routes and plugged him in at wide receiver.

Sperbeck played as a true freshman, catching a nondescript five passes for 40 yards. He had zero through the first 3½ games of his sophomore season—until Matt Miller’s season-ending injury at Air Force in 2014. Since then, Sperbeck has added 201 receptions for 3,312 yards and 20 touchdowns, with a Fiesta Bowl Offensive MVP trophy on his mantel. The Broncos had him throw a pass as a true freshman. It was intercepted. As a sophomore, junior and senior he’s tried 12 more, completing eight for 181 yards and five touchdowns. An efficient guy. And one of the all-time Boise State good guys.

Darren Lee goes back further than any other current Bronco. The special teams dynamo and now standout linebacker signed with Boise State out of Lassen High in Susanville, CA, way back in 2010 before going on a two-year LDS mission. Nobody has led the team onto the field with the Hammer more than Lee. He made his mark primarily on kickoff and punt cover teams his first three seasons, but a first-quarter injury to Joey Martarano in September’s opener at Louisiana-Lafayette thrust Lee into the lineup, and the Broncos have had trouble getting him out. He has 45 tackles, three sacks, and a pure-effort touchdown on his strip-and-sprint fumble recovery at Oregon State in September. Lee’s energy will be missed.

Sperbeck and Lee are among 17 of this year’s Boise State seniors who saw action for Petersen as freshmen in 2013. The others are Chaz Anderson, Travis Averill, Steven Baggett, Kellen Buhr, Devan Demas, Elliot Hoyte, Chanceller James, Sam McCaskill, Jonathan Moxey, Taylor Pope, Tyler Rausa, Tanner Vallejo, Sean Wale, Ben Weaver and Mario Yakoo. In fact, the only two seniors who don’t go back to the Coach Pete era in tomorrow night’s contingent: Raymond Ford, last year’s junior college transfer at cornerback, and offensive tackle Will Adams, this year’s graduate transfer from Auburn. Gabe Perez also played as a true freshman in 2013—he’s a junior now after using his redshirt year last season and will be back in 2017.

Technically there will now be 20 players honored tomorrow night, as the Statesman’s Dave Southorn reports that junior long snapper Kevin Cota is retiring from football. Cota didn’t travel to the Hawaii game, replaced on punt snaps by Brock Barr and in placekicking situations by Nicholai Pitman. One other junior who may or may not be back next year will not be honored, because we know he won’t be retiring from football. Hmmmm, who what that be? Read on.

Too bad there’s not a “Swiss Army Knife” award in college football. But there is a Doak Walker Award that goes to college football’s top running back, and Boise State’s Jeremy McNichols has been named one of 10 semifinalists for 2016. Two other Mountain West running backs are on the list (no surprise), San Diego State’s Donnel Pumphrey and Wyoming’s Brian Hill, who face off Saturday in Laramie. Among the others are Stanford’s Christian McCaffrey and LSU’s Leonard Fournette. Outside of McCaffrey, McNichols is as versatile as any of them. Over the past two seasons, McNichols has scored 48 touchdowns, more than any player in the FBS, and he leads the nation this year with 22. And he’s tops among the Walker semifinalists with 428 receiving yards and four TD catches.

Idaho State closes the season against Weber State Saturday in Holt Arena, hoping to finish 3-8 instead of 2-9. The Bengals have lost six games in a row. It’s also Senior Day in Pocatello, and Meridian’s Hayden Stout headlines a group of 16 players making their final appearances. Stout, the third-year starting linebacker, is ISU’s third-leading tackler with 70 this season after leading the defense with 113 stops last year. He’s missed only one game since his redshirt freshman year.

Paris Austin was in the background last Saturday for Boise State men’s hoops, scoring just two points while going 1-for-6 from the field in 18 minutes in the win over Northwest University. Austin will have to move to the foreground this evening as the Broncos open the Gildan Charleston Classic against host College of Charleston. If he’s on his game, Austin could take on the look of a Derrick Marks. “He’s a hard match up if you want to extend,” said coach Leon Rice of Austin after Boise State’s first exhibition game. “He can get by guys, put pressure on you and get into the paint. That’s what we need him to do. I think we have nice pieces around him.” This marks Boise State’s third appearance in major early-season tournament in the Rice era, joining the 2013 Diamond Head Classic and the 2015 Wooden Legacy.

The Norfolk Admirals had been a goal-challenged hockey club coming into their series against the Idaho Steelheads, managing just 17 goals all season, second-fewest in the ECHL. Norfolk potted four versus the Steelheads last night, but Idaho scored more, recording a 6-4 victory in its first-ever meeting with the Admirals. Will Merchant had two of the Steelies’ goals, both on power plays, and added an assist. Norfolk has just one victory in its first 12 games this season—and zero at home. The three-game set continues tomorrow night.

The Boise State women’s volleyball team went the five-set distance with Colorado State last night and took over sole possession of first place in the Mountain West before a sold-out house in Bronco Gym. CSU took a two sets-to-one lead after routing the Broncos 25-10 in the third set. But Boise State returned the favor in the fourth and fifth and now needs one win in its final two matches to win the conference championship and advance to the NCAA Tournament for the first time. Next door in Taco Bell Arena last night, the Bronco women’s basketball team nailed a school-record 18 three-pointers to blast past Portland State 94-76. Brooke Pahukoa hit seven of the treys and scored 25 points, while Marta Hermida hit six threes and netted 22 points.

The Idaho Vandals hand Boise State the first shutout in Bronco history, beating BSU 37-0 in Bronco Stadium. The victory saved a third straight winning season for coach Dennis Erickson and the Vandals, who were 2-5 in mid-October but finished the year with four straight victories. The shutout remains one of only two ever suffered by Boise State—the other was at Washington State in 1997. 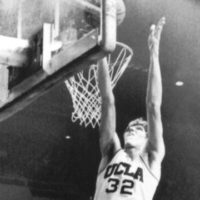 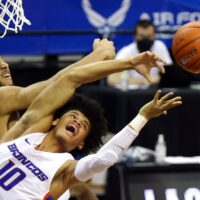 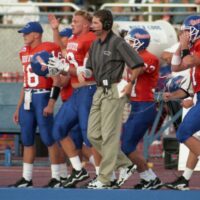 This Day In Sports: Koetter’s breakthrough game at Boise State