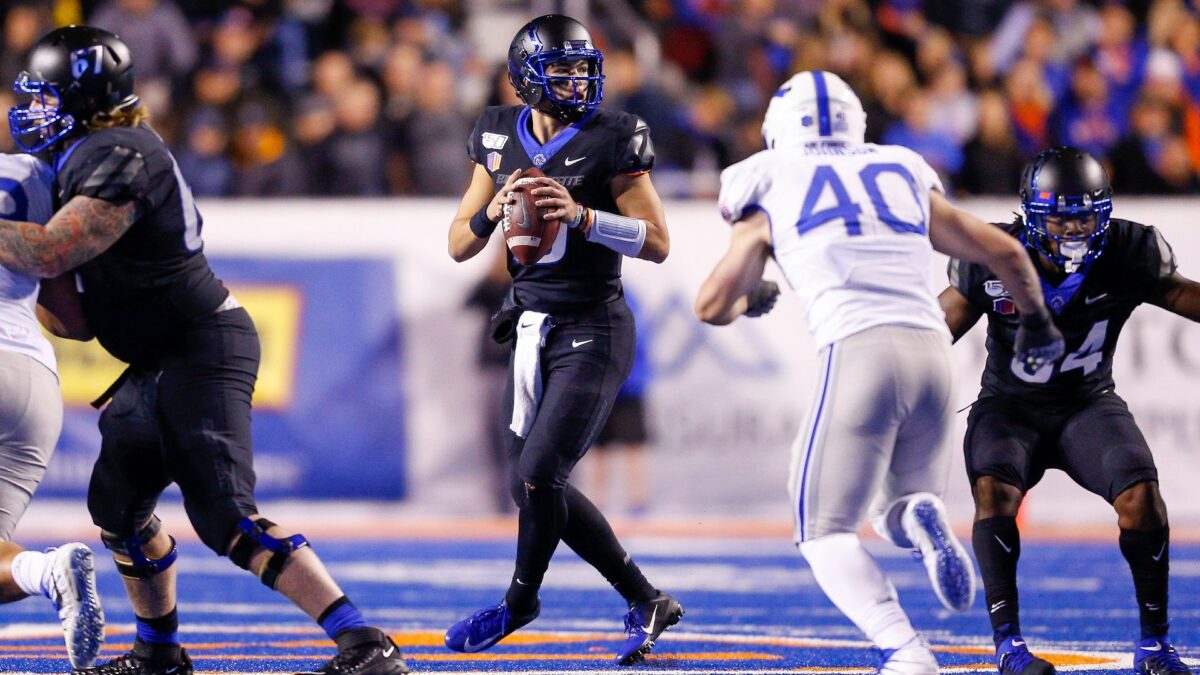 Two years ago it was Brett Rypien, followed by Chase Cord. Last season, it was Hank Bachmeier, followed by Cord, followed by Jaylon Henderson. This year it’s Bachmeier, followed by Jack Sears (Cord may or may not suit up this fall as he rehabs injuries). “Followed by” is important as it pertains to Bachmeier. The 2.0 version of the sophomore quarterback has hopefully learned how to sense pressure and slide while scrambling. Bachmeier will get his first pop quiz Saturday night when the long-awaited 2020 season opens against Utah State at Albertsons Stadium.

This Bryan Harsin soundbite applies to both Bachmeier and Sears: “Practice is different—you don’t get hit in practice.” Now it’s the real thing, and you can count on Bachmeier being hit. How and where he is hit may determine if Sears has a chance to be hit (although Broncos offensive coordinator Eric Kiesau has strongly hinted that the transfer from USC is part of the game plan). Sears’ running ability screams “special package” for the Broncos. He rushed for 2,286 yards at San Clemente High, averaging 7.4 yards per carry.

Transfers from Power 5 schools don’t always work out in the Group of 5. It often has to do with the mindset. But Sears has seen this all before. He transferred to Southern California power San Clemente his sophomore year in high school, even though future USC star and current New York Jets quarterback Sam Darnold was already there. “A lot of guys would have wanted to go somewhere else where they could start,” San Clemente coach Jaime Ortiz told The Athletic’s Dave Southorn last spring. “Instead, he had no problem being the JV quarterback, and even started at wide receiver for us. He was the ultimate teammate.” Sears now comes from USC to Boise State for two years, knowing that Bachmeier has three left to play.

NOT THE ATMOSPHERE TO WHICH THEY’RE ACCUSTOMED

Utah State quarterback Jason Shelley and his teammates will have to deal with a solid Boise State defense Saturday night, but they won’t have to deal with more than 30,000 fans (that can sound like twice that many). Broncos opponents in Albertsons Stadium committed 48 false starts over the past two seasons, the most by visiting teams at any venue in the country. Instead, the Aggies will be looking at almost 700 cardboard cutout photos purchased by fans and hearing up to 70 decibels of crowd noise (that’s as much as the Mountain West will allow). I guess we’ll find out if there really is a blue turf mystique, because it’s on its own. Editor’s note: this will be the first home game I’ve missed in almost 20 years, and only the ninth in the past 49 years.

The headline on the release regarding Curt Apsey’s resignation Wednesday was “Boise State Launches National Search for AD.” There’s a groundswell of support for in-house candidate Brad Larrondo, but the university is going to look behind every curtain. The Broncos’ search for Gene Bleymaier’s replacement in 2011 went national and produced Mark Coyle from the Kentucky staff. Coyle only stayed 3½ years before leaving for Syracuse (he’s now at Minnesota). But he made an impact that is still being felt today, arranging home-and-home football contracts with Virginia, Oklahoma State, Michigan State and Florida State.

ROH SHOULD ROW THE BOAT

This week’s voting for Boise State’s All-Decade team was for tight end, and there were three candidates: John Bates, Jake Roh and Kyle Efaw. Bates hasn’t had a season (yet) like the big ones turned in by Roh and Efaw. And Roh is the only one who had a first-team all-conference nod. So let’s say that Roh noses out Efaw, the Capital High grad who was the offensive MVP of the 2010 Fiesta Bowl but played only two seasons in this decade. Their career stats were uncannily close—Roh made 117 catches for 1,288 yards and 12 touchdowns, and Efaw had 103 receptions for 1,269 yards and 13 TDs. The official winner will be announced this afternoon.

COWBOYS TRY TO CORRAL THE PACK

Beyond the blue turf, the Mountain West’s marquee game Saturday is Wyoming at Nevada. Bronco Nation can take a long, hard look at the Cowboys and put it in the back pocket for the ice box game on December 12, while a lot of people like the Wolf Pack as a conference dark horse. The Pokes have two accuracy-challenged quarterbacks, Sean Chambers and Levi Williams, but they’re both solid runners,and that’s where Wyoming has a big edge. Running back Xavian Valladay is poised to pound the Pack into submission, having rushed for 206 yards against Nevada last year in a 31-3 win in Laramie. The Cowboys are 4½-point favorites. I’m not sure that spread is high enough.

How will George Iloka look back on the 2020 season? It was a comeback year for the former Boise State star, as he signed as a free agent with Minnesota after sitting out one season. Iloka was the Vikings’ No. 3 safety and a special teams mainstay, making six tackles in four games. He played 43 snaps in Minnesota’s lone win of the season 10 days ago at Houston. But Iloka tore his ACL Wednesday and is out for the season. Adding insult to injury, Iloka went down toward the end of the final Vikings practice before a four-day bye week break. Iloka will be 31 years old next March, so another comeback will be tough.

October 23, 1988: Dan Marino has the biggest day of his NFL career, but it comes in a loss for the Miami Dolphins. When the New York Jets went up 30-10 at halftime, the Dolphins were forced to go to the air. Marino threw for 521 yards—second in NFL history at the time to Norm Van Brocklin’s 554 yards in 1951—and three touchdowns. But Marino was also picked off five times in a 44-30 Miami loss. He remains fifth on the NFL list for career passing yards with 61,361, behind only Drew Brees, Tom Brady, Peyton Manning and Brett Favre.