Idaho hasn’t played a conference game in the Big Sky since November 18, 1995, when the Vandals beat Boise State 33-13 in the Kibbie Dome. Now, the first league tilt of Big Sky Era No. 2 is three days away, as Idaho travels to UC Davis. For better or worse, here’s another Bronco reference: the Aggies are led by former Boise State coach Dan Hawkins. UI will certainly have his attention. Hawkins went 5-0 against the Vandals while head coach at Boise State from 2001-05. Those were Games Nos. 3-7 in the Broncos’ 12-game winning streak at the rivalry’s end. Included were the closest game in the streak, 14 points in 2003, and the biggest blowout, 58 points in 2004. Only one of the games was a conference matchup, with Boise State winning 70-35 in the WAC in 2005.

Coach Hawk’s current team is 2-1 and is ranked 21st in the STATS FCS Poll, and that’s why he was hired at his alma mater—to reclaim its upper-echelon perch. UC Davis moved to the FCS from NCAA Division II in 2007, but lately it has been unable to sustain the success of legendary 1970’s and 1980’s coach Jim Sochor and his successors, Bob Foster and Bob Biggs. Hawkins is now in his second season as coach after going 5-6 last year. The Aggies started with a 44-38 upset (maybe) of San Jose State before drubbing San Diego 54-21 and falling at No. 9 Stanford 30-10. (Hey, the Aggies lost to the Cardinal by one point fewer than San Diego State did.)

Idaho, meanwhile, won eight league titles as a charter member of the Big Sky from 1963-1995. The Vandals made the Division I-AA Playoffs in 11 of their final 14 seasons in the conference, including the final one when they knocked Boise State out of consideration in the season finale. We’ll find out a lot about this year’s Idaho team Saturday in Davis. The Vandals are allowing 44.5 points per game—79 at Fresno State, 10 versus Western New Mexico, divided by two, right? Idaho’s offense is averaging only 355 yards per game. The pass efficiency ratings of quarterbacks Mason Petrino and Colton Richardson took a leap after the win over Western New Mexico, as they should have. Now comes the legitimate test.

Not only were missed tackles an issue for Boise State at Oklahoma State, but missed sacks as well. OSU quarterback Taylor Cornelius slipped out of the grasp of pursuing Broncos numerous times (some of his damaging runs were designed, some were scrambles). Boise State could have had, well, seven sacks—same number as the Cowboys registered. As it was, Jabril Frazier logged two and Durrant Miles one. Miles leads the Broncos in sacks this season with three. Sonatane Lui doesn’t have one yet, but he does lead the defensive line in tackles with 11. Sack numbers have moderated for Boise State, as the Broncos now lead their opponents only 9-8 in that department.

While Boise State has a bye week to try to correct the wrongs of the Oklahoma State game, Wyoming has one of its own to figure how it came within 17 seconds of losing to Wofford, an FCS school. A nine-yard touchdown pass from Tyler Vander Waal to Rocket Ismael Jr. saved the Cowboys against the Terriers, who came in as a top 10 FCS team. Coach Craig Bowl tried to warn his team all week, and he should know, having upset several FBS teams while leading North Dakota State to three straight FCS national championships. Was Wyoming looking ahead to Boise State? Not with a bye coming up. It’s more of an indictment of the current state of the Pokes offense.

You still scratch your head and wonder, “How did they do that?” BYU stunned Wisconsin 24-21 last Saturday with these numbers from Eagle’s Tanner Mangum: 12-of-22 for 89 yards, just four yards per attempt. Otherwise, though, it was a perfect storm, starting with the Cougars defense. The timing of BYU’s big plays were killer. The Badgers’ Jonathan Taylor was the nation’s leading rusher coming into the game, averaging about 200 yards per game. But Taylor managed just 117 yards on 26 carries and was kept out of the end zone. For BYU, Squally Canada rushed 11 times for 118 yards, including a 44-yard run in the first half and a 46-yard run in the second half. What’s on the horizon? After a breather this week against FCS McNeese State, it’s a trip to Washington.

How about a de facto Treasure Valley high school all-star game? It may feel like that Saturday at Simplot Stadium, as the College of Idaho-Rocky Mountain College game will feature more than 30 former players from the 5A/4A Southern Idaho Conference alone. Rocky Mountain’s roster is dotted with Treasure Valley players, including quarterback Drew Korf from Capital High. Korf is a backup and hasn’t caught fire yet, going 10-of-28 for 105 yards and one touchdown against two interceptions. But Emmett’s Lucas Overton has been hot for the Battlin’ Bears. Overton is their second-leading receiver, with 18 catches for 223 yards and three touchdowns.

Under normal circumstances, Jay Ajayi would be really excited that Carson Wentz was returning as Philadelphia quarterback this week against Indianapolis. But now it’s Ajayi’s status that’s in question. The former Boise State star had a disjointed seven carries for 23 yards and a touchdown in Philly’s 27-21 loss at Tampa Bay last Sunday. Ajayi limped off the field with an apparent back injury after losing seven yards on his first rush of the game. He was in and out of the locker room before finally coming back into the game in the second half and promptly gaining 20 yards on a rush—he later scored a short touchdown, but he was still fighting through back pain at that point. Speculation is Ajayi will be out.

September 19, 1981: Idaho State comes to Bronco Stadium to face defending Division I-AA national champion Boise State and stuns the Broncos, 21-10. The Bengals surprised Boise State with quarterback draws from rifle-armed but slow-footed quarterback Mike Machurek (whose backup was a guy named Dirk Koetter). ISU would roll through the rest of the 1981 schedule under coach Dave Kragthorpe and succeed the Broncos as national champions. 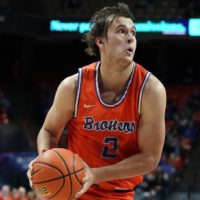