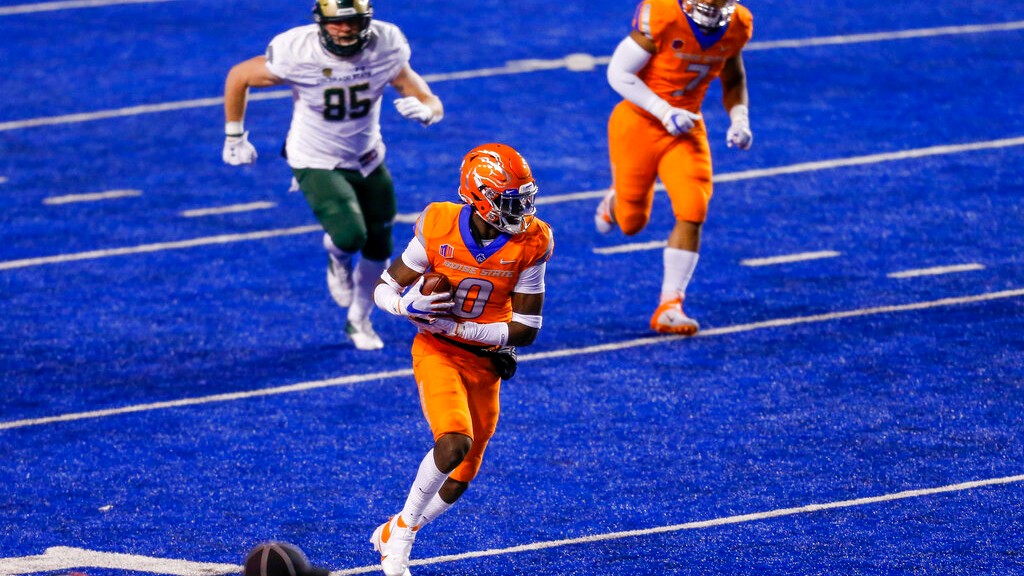 This might just be water cooler talk for hardcore Mountain West fans, but Bruce Feldman of TheAthletic has unveiled his list of college football’s top 35 breakout player picks for 2021 after quizzing coaches. There’s a trio from the Mountain West, and Boise State will face all three. No. 12 on the docket is running back Greg Bell of San Diego State. The Aztecs signed Bell out of high school, then he went to a junior college, then he signed with Nebraska. Back at SDSU he’s being billed as a combination of Donnel Pumphrey and Rashaad Penny—a potential 1,500-yard rusher. Also on Feldman’s list from the Mountain West is Byron Vaughns, a Utah State defensive end who had “three underwhelming seasons at Texas,” and No. 28 Jalen Cropper, the Fresno State wide receiver who has yet to reach his massive potential.

As you can see, there are no Boise State players on Feldman’s breakout list, but there certainly should be. So who would I pick from amongst the Broncos? I’d say safety JL Skinner, who was the trendy pick as a breakout player a year ago. He’s kind of in Cropper’s boat. Skinner didn’t really break out last season, but we can discount that due to COVID. Even though he’s officially a junior, Skinner is still a candidate in my mind. He did have Boise State’s only true in-game interception last fall, but that was his only pass breakup of the year. He can become more of a ball hawk. Skinner was fourth on the team in tackles with 37 in six games, but he can also become more of an enforcer. At 6-4, 216 pounds, Skinner is everything you want in a safety.

SWITCHING THE SPOTLIGHT TO BATES

While Allie Ostrander and Marisa Howard await the women’s 3,000-meter steeplechase final Thursday night at the U.S. Olympic Trials in Eugene, let’s update another former Boise State distance running star. Emma Bates, the 2014 NCAA champion in the 10,000-meters, will run that event Saturday night at Hayward Field. It marks a return to her running roots. Bates, who will be inducted into the Boise State Athletic Hall of Fame in October, has been concentrating on marathons in recent years, but she didn’t qualify at the Olympic marathon trials 16 months ago. By the way, Ostrander reportedly is going to run the 10,000, too.

All we have to go on so far from the G-League Elite Camp that wrapped up Monday night is box scores. Former Boise State star Derrick Alston Jr. had mixed results at the Chicago event and hasn’t been invited to the NBA Combine this week. In his first scrimmage at the Elite Camp, Alston went 0-for-5 from three-point range and scored two points in 19 minutes. Things were much better in his second game—Alston put up 12 points, all from beyond the arc, in 20 minutes of floor time. But without a breakthrough, he remains a long-shot for the NBA Draft.

Resilient Bishop Kelly High grad Josh Osich has added another season to his big league career. Osich made his 2021 debut with the Cincinnati Reds Monday night, pitching 2 1/3 scoreless innings and allowing two hits against Minnesota. This is Osich’s fourth team in three years after not being re-signed by San Francisco after the 2018 season. The former Oregon State standout had a great rookie year with the Giants in 2015, posting an ERA of 2.20. But that number jumped by an average of two runs over the following three seasons. Osich never gave up, though, and now he has a fresh start with the Reds.

After taking two of three games in Ogden, their first series win of the season, the Boise Hawks have pulled themselves out of last place in the Southern Division of the Pioneer League. After a 3-12 start, the Hawks have split their last 12 games. Boise returns to Memorial Stadium tonight after Tuesday’s day off, opening a what promises to be a toasty six game home stand against the Billings Mustangs. Capital High grad Matt Dallas will start his fifth game of the season for Hawks. Dallas is the only Boise hurler with a winning record—he’s 2-1 with a 4.37 ERA.

June 23, 2005: The San Antonio Spurs win their third NBA championship in seven years, and Tim Duncan takes his third Finals MVP award. The Spurs dethroned the defending champion Detroit Pistons with an 81-74 Game 7 victory. Duncan recorded double-doubles in every game for the Spurs, who started out as the Dallas Chaparrals of the ABA before becoming one of the NBA’s most unexpected dynasties under coach Gregg Popovich.

Bronco football: Who’s a go, and who is not