The past few years, we always focused on who would make up Boise State’s “second wave” of wide receivers behind some combination of Matt Miller, Shane Williams-Rhodes, Thomas Sperbeck, Chaz Anderson and Cedrick Wilson. There have always been at least two guys in the “first wave.” This season, the Broncos are still struggling to fill that first group behind Wilson, by far the team’s best offensive player. Wilson has 16 catches for 276 yards and two touchdowns over the first three games. Fellow starters A.J. Richardson and Sean Modster have combined for 13 receptions and 94 yards, just 7.2 yards per catch. Wideouts not named Wilson have not been productive.

Before the season, the spotlight in the Boise State-Virginia game was expected to be on Broncos quarterback Brett Rypien. But Rypien’s status is uncertain Friday, and now Cavaliers QB Kurt Benkert marches onto the blue turf with a mountain of momentum. Teammates have long said Benkert has a “rocket launcher” of an arm, but his throws didn’t always reach their targets (his completion percentage last year was 57.5 percent). Last Saturday, though, Benkert was 30-of-40 for 455 yards and three touchdowns with one interception in the rout of UConn. It’s part of the process for Virginia offensive coordinator Robert Anae, a one-time assistant under Dirk Koetter at Boise State. At BYU, Anae coached Tanner Mangum in 2015 and Taysom Hill in 2014—their completion percentages were 60 and 67 percent, respectively.

Former Virginia and current Philadelphia Eagles defensive end Chris Long is stepping up for his hometown. Long has pledged to donate his first six game checks this season (a total of $375,000) to fund scholarships for Boys & Girls Club students in Charlottesville. The scholarships will provide two students with a seven-year, all-expenses-paid school program at Long’s high school alma mater, St. Anne’s-Belfield School. The gesture is meant to “promote equality through education.” The current Cavaliers sport “Hoos Together” patches on their jerseys as a show of unity for Charlottesville. Long, by the way, was a freshman with UVA when it fell to Fresno State 37-34 in overtime in the 2004 Humanitarian Bowl.

An update on Elliott Hoyte’s campaign to fill Albertsons Stadium for the Wyoming game October 21. The former Bronco defensive lineman is raising money through a GoFundMe campaign for fans who don’t have the means to pay for tickets for Boise State games. Hoyte’s original goal was $2,500, but he bumped that to $10,000 last Saturday after a strong surge of initial response. Hoyte reports that the Meridian Police Department and CATCH, ETC., an organization dedicated to ending family homelessness, have joined the push. The current count is has topped $6,000. Hats off to Hoyte.

Conventional wisdom said Justin Wilcox’s first season at Cal would be rocky. The former Boise State, Tennessee, Washington, USC and Wisconsin defensive coordinator wasn’t hired until mid-January. That’s two months before spring football. Then Wilcox and the Bears had to open the season at North Carolina, which harbored high hopes for 2017. They beat the Tar Heels 35-30, then returned home and overcame a slow start to down Weber State 33-20. The crown jewel so far, tough, came last Saturday, when Cal rallied past Ole Miss with 20 unanswered second half points to win 27-16 in Berkeley. Wilcox’s local tie to the Bay Area is the same one he had here in his Bronco days—his dad. Dave Wilcox went from Vale High to Boise Junior College to Oregon to a Hall of Fame career with the San Francisco 49ers.

If you want to simplify Idaho’s task in its Sun Belt opener Saturday at South Alabama, it would be to get the Jaguars into third down situations. The Vandals are second in the conference and 41st in the country in denying third down conversions, with opponents advancing just 31.8 percent of the time. That stat merges nicely with this one: South Alabama’s offense is 128th out of 129 FBS teams nationally, converting only 17.9 of its third downs. The Vandals have held opponents to fewer than 10 yards on 20 out of 41 drives this season.

It was a major mood swing—in a positive way—for College of Idaho last week in a 28-20 win over Eastern Oregon. With a modicum in confidence after an 0-3 start, the Coyotes go to Rocky Mountain College in Billings, MT, Saturday. The Yotes used a semi-platoon at quarterback last week, with Boise High grad Tyler Cox spelling starter Darius-James Peterson. One thing that does is help preserve Peterson, who had been sacked seven times the previous week. Cox’s first drive was money, as he went 5-for-5 and tossed his ninth career touchdown pass while adding 27 yards on the ground. Rocky Mountain, incidentally, is coached by Jason Petrino, the cousin of Idaho coach Paul Petrino and Louisville coach Bobby Petrino.

ESPN.com’s “Bottom 10” is always fun. Unless you’re in it. UTEP is—ranked No. 9 on the unwanted list after being destroyed by Arizona 63-16 at home last Friday. Notes Ryan McGee: “On Sunday, the Minors fired their offensive coordinator, presumably because they are ranked 126th in the nation in points scored per game. Memo to their defensive coordinator: You are ranked 127th in the nation in points allowed per game.” That O-coordinator was Brent Pease, the former Boise State wide receivers coach and O.C. The head coach is Sean Kugler, who did a masterful job with the Bronco offensive line in 2006 on the way to BSU’s first Fiesta Bowl victory.

In the lowest-scoring game in Bronco Stadium history, Boise State edges BYU 7-6 before a noisy record crowd of 36,864 in the newly-expanded facility. A national ESPN audience expecting offense got defense instead, as the Broncos held the Cougars to 200 total yards, and BYU returned the favor by keeping Boise State’s offense out of the end zone. The Broncos’ only touchdown was scored on a 36-yard interception return by 306-pound defensive tackle Mike Atkinson. The game was decided when the Cougars elected to go for two points after their only touchdown of the game and failed with 3½ minutes left. 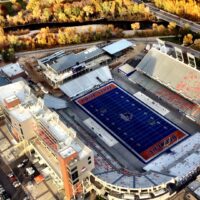 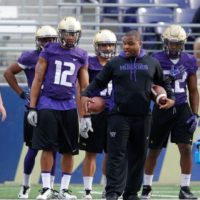