One of Boise State’s all-time greats at quarterback, Ryan Dinwiddie, is in a new role this season on the Montreal coaching staff. Dinwiddie, who was hired onto the Alouettes staff by former Bronco coach Dan Hawkins during the latter’s brief stint as a CFL head coach in 2013, became the team’s co-offensive coordinator last season. Some opined that Dinwiddie wasn’t ready for the move. He was shoved into the play-calling role when Montreal fired its O-coordinator during training camp. The Als then lost seven of their first eight games, and Dinwiddie was demoted to running backs coach after the season. “I was the only one ready to call plays,” said Dinwiddie of the staff’s sudden change. “Obviously, it was a tough situation, but it was a great growing experience. That will help me grow for the future. I want to be an offensive coordinator again.”

There’s an unlikely alliance on the Montreal staff. The team’s new linebackers coach is Chris Tormey, the former Idaho and Nevada coach who spent last season at South Whidbey High School in Washington. Tormey was the head man with the Wolf Pack when Dinwiddie played his final game on the blue turf in 2003, and Boise State blitzed the Pack 56-3 that day to clinch the WAC championship. Nevada athletic director Chris Ault fired Tormey less than 24 hours later. He has since been an assistant at Washington, Hawaii, Washington State and Wyoming.

Turns out Philadelphia will be represented in the Utah Jazz Summer League in Salt Lake City, and that’s where former Boise State star Derrick Marks will be playing beginning Monday. Marks is one of five true guards on the 76ers roster (another is ex-Nevada standout Deonte Burton). Marks is not on the Sixers’ roster for the Las Vegas Summer League July 10-20. Philly will play San Antonio, Boston and Utah next week at EnergySolutions Arena.

Here’s an update on a couple former Broncos, both members of the 2014 senior class, who spent last season overseas. Forward Ryan Watkins played in Holland for Aris Leeuwarden, which went 8-20 to finish sixth in the top Dutch pro league and lost in the quarterfinals. He picked right up where he left off as a Bronco senior, leading the league in rebounding with 10.3 per game. Watkins added 14.6 points per game and was one of two players in the circuit to average a double-double. Forward Thomas Bropleh played for Finke Baskets in Germany’s ProA League (second division). His team finished 11-19, which was 12th out of 16 teams. Bropleh led his team in scoring at 15.9 points per game and averaged 4.6 rebounds. Both Watkins and Bropleh are leaning toward Europe next season, although they’ll probably land with new teams.

If there’s any doubt that the New Mexico basketball program is the best-supported and most tradition-rich in the Mountain West, witness the first-ever Lobo All-Star Game. It was played Sunday night in The Pit, and it drew nearly 9,500 fans. We’re talking a Sunday night in the summer. Former Lobo power forward and current Chicago Bull Cameron Bairstow organized the game and got plenty of support from other former UNM stars. Twenty-one ex-players participated in all. There was even a radio broadcast of the event.

The NBA D-League is up to 19 teams now with the addition of its first Canadian entry. Toronto has purchased an expansion franchise that will play in Mississauga, Ontario, to be called “Raptors 905,” a nod to the area code in that neck of the woods. There’ll be no city or province name attached to it. They may have been trying to avoid the massive mispronunciations that would come with Mississauga. Raptors 905 will not follow the L.A. D-Fenders and Bakersfield Jam models; they’ll play in a real arena, the Hershey Centre in Mississauga, which is about 20 miles outside Toronto. Raptors 905 will share the facility with a hockey tenant—the Mississauga Steelheads.

One player down, a whole bunch to go for the Idaho Steelheads. Jake Rutt has become the first player to agree to terms with the Steelheads for the 2015-16 season. Rutt finished his college career at Maine in March and turned pro, joining the Steelies late in the season. The 24-year-old defenseman posted an impressive plus-15 plus/minus rating in the 15 total games he played with Idaho.

The Boise Hawks wasted a solid start by Javier Palacios last night, blowing a 3-1 lead in the bottom of the eighth inning and falling to Everett, 5-3. Palacios allowed one unearned run over six innings before the Aquasox rocked Taylor Black with a four-run eighth. The loss drops Boise to 5-8 on the season. The Hawks return from their eight-game road trip tonight to start a three-game series versus Salem-Keizer. They hope to retain the momentum at the gate from the season-opening homestand, when they sold out the first three games of a series—and drew crowds of 3,000-plus in the first four—for the first time since 2004.

A pitcher who spent parts of three different seasons in Boise, Marcus Hatley, was called up by the St. Louis Cardinals yesterday. Now he anxiously awaits his big league debut after eight years in the minors. Hatley went 2-3 in 17 appearances with the Hawks in 2007, 2008 and 2010. He’s been outstanding at Triple-A Memphis this season, going 4-2 with a 1.69 ERA in 27 outings. Hatley has served up just two home runs in 37 1/3 innings.

Tiger Woods passes Jack Nicklaus into second place on the PGA Tour victories list. Woods won the AT&T National as his comeback from the troubles of 2½ years seemed to be gaining steam. It was the 74th tour win of Woods’ career, leaving only Sam Snead ahead of him with 82 victories. Tiger still trailed Nicklaus in major championships with 14 to the Golden Bear’s 18. And he does to this day. Woods won five more PGA Tour events in 2013—and none since. 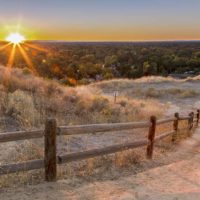