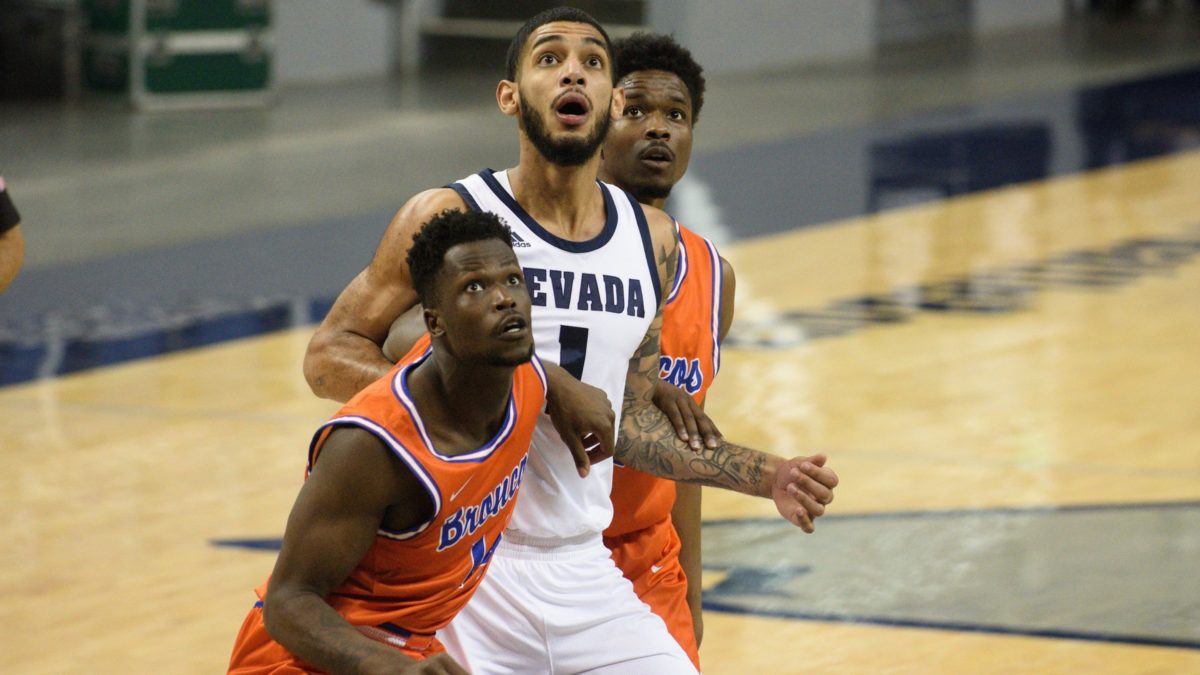 Three of Boise State’s nine losses last season were to Nevada. The asterisk there is that because of the COVID-affected Mountain West schedule, the Broncos had to play twice in Reno (the third game was in Las Vegas in the Mountain West Tournament). It’s hard not to revisit those games in preparation for tonight’s road game against the Wolf Pack, especially the last one. Boise State’s defense has come a long way since last March—now we’ll see how far. Nevada’s offense embarrassed Boise State in the 89-82 tournament defeat. The Pack shot 56 percent and rolled up 51 points in the first half. That’s the backdrop tonight for a Broncos team that regularly holds opponents in the 50s for the entire game. What will their legs be like tonight after a 15-day COVID-related layoff?

Wolf Pack star Grant Sherfield is still leading the way down south. In fact, he was the Mountain West Preseason Player of the Year. Currently Sherfield is averaging 18.8 points and 6.6 assists per game. And what he did in Nevada’s three-game sweep of Boise State last year speaks volumes. Sherfield averaged exactly 25 points per game. The Broncos went into the 2021 regular season series at Nevada with a 14-2 record. This year they take a seven-game winning streak to Reno. Is that a bad omen or good omen? The Pack have won six of their last seven games.

We haven’t seen Boise State men’s basketball since December 28, but we do know they’re suddenly in the throes of a brutal road stretch thanks to a Mountain West schedule change. Due to COVID-related concerns with San Diego State, the Aztecs won’t be able to play at New Mexico on Saturday. The Broncos will go to Albuquerque instead, skipping their bye weekend to face the Lobos on FS1. So now, Boise State is poised to play four of its next five games on the road. The Broncos only home game between now and January 25 will be next Tuesday against Air Force. “Prater Math” from Mike Prater on KTIK deduced that Boise State is playing five games in five different states over 11 days beginning tonight.

A discussion of Kellen Moore’s chances at an NFL head coaching job can’t go without talk of what a cutthroat business it is. Would he want to go to Miami, where Brian Flores was inexplicably fired after the Dolphins won eight of their final nine games? One guy who was affected by Flores’ dismissal was former Boise State star Gerald Alexander, who coached Miami’s defensive backs. Here’s part of Alexander’s “Twitter statement” on him: “I’ve spent all day to find the words of appreciation that I have for Brian Flores. I can’t thank the man enough.”

This makes it more painful for Alexander: “I’m very grateful for the opportunity that I got a chance to witness Coach Flo lead an organization as one of the few Black Head Coaches in all levels of football. Representation matters to me. For me to see what I saw everyday from him in his role daily was inspiring. It gave me a clear visual of what I would want to see through my own lens one day. I can’t thank the man enough for challenging me and helping me grow to become a better teacher, coach and professional. It was truly an honor to work under Flo’s leadership!” Tell me Flores didn’t deserve another year in Miami.

Now that the college football season is over, reality sets in that a 12-team College Football Playoff, seemingly so feasible six months ago, is in long-term limbo, as Power 5 conferences insist that all of their champions get in automatically. Scott Dochterman of The Athletic writes that this can all be fixed with a simple solution: “Allow every Power 5 champion access—if they hit a target ranking such as the top 20. That gives adequate flexibility with a minimum standard for a highly competitive power conference without a standout team. If a 12-team playoff was in place in 2012, there was no reason unranked Big Ten champion Wisconsin should have access over No. 19 Boise State. Or if in 2018, had 7-5 Pittsburgh upset unbeaten Clemson for the ACC title, it didn’t deserve a playoff spot over No. 21 Fresno State.”

Here’s the other Broncos-related point that Dochterman makes as he contends that the Group of 5 would still really have to earn it: “It’s more difficult for G5 teams to gain lofty rankings now than during the BCS era. From 2008 through 2010, two G5 teams were ranked inside the BCS’ top 10 each year. Over the 16-year period beginning in 2006, seven teams currently or formerly in G5 conferences made at least three appearances in the final BCS or CFP rankings. Six of those programs (BYU, TCU, UCF, Cincinnati, Houston, Utah) since were invited to Power 5 conferences. Only Boise State (nine appearances) remains outside the Power 5.”

CURTAINS ON THE 2021 RANKINGS

Two Mountain West teams ended up in the final AP rankings on Tuesday—Utah State at No. 24 and San Diego State No. 25 (USU was also 24th in the Coaches Poll, while the Aztecs were first among others receiving votes). Two other Boise State opponents were in the AP Top 25, as Oklahoma State finished at No. 7 and BYU at No. 19. The Broncos were 2-2 against teams in the final rankings, and without going down a certain rabbit hole from a certain game on September 18, they should have been 3-1.

January 12, 1975: The Pittsburgh Steelers win the first of their six Super Bowl titles with a 16-6 victory over the Minnesota Vikings. In a battle between the NFL’s two best defenses, the Steelers’ “Steel Curtain” outdueled the Vikings’ “Purple People Eaters,” holding Fran Tarkenton and company to 119 yards of total offense and recording the first safety in Super Bowl history. The game’s Most Valuable Player was Pittsburgh running back Franco Harris, who rushed for 158 yards. For Minnesota, it was the third Super Bowl loss in three tries.