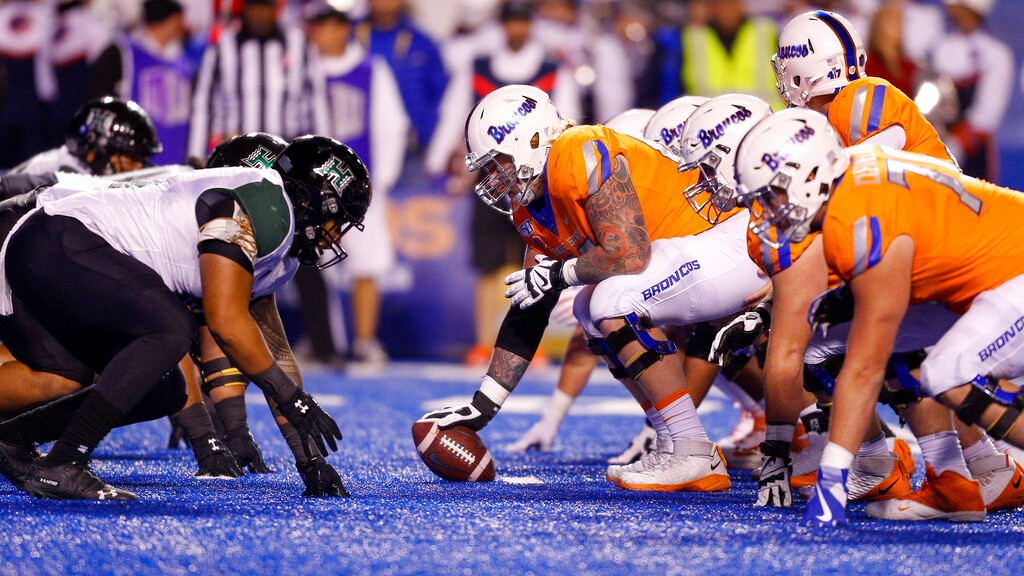 Talk about moving parts. We don’t know what lies ahead for Boise State in conference realignment. But the Pac-12 is not in the cards right now. The academic differences are too much for the prestige-conscious conference brass to overcome. The way I see it, Boise State has to seek the Big 12 option, and hope upon hope that the conference would survive—and expand by more than four schools, because the Broncos are behind Cincinnati, Houston, UCF and Memphis in geography and TV market value, and behind BYU in the latter. Boise State would have to be tethered to BYU, as going in with the Cougars as travel partners is the way it would make the most sense.

If the Broncos are on the outside looking in after all Power 5 expansion opportunities are exhausted, it won’t be for lack of effort or foresight. They have the right man in the athletic director’s chair right now in Jeramiah Dickey. “Boise State will continue to do its due diligence on all fronts regarding what is best for its athletic department, and ultimately, the institution,” Dickey told the Idaho Statesman. I believe that.

One thing that came out of Mountain West Media Days loud-and-clear from Utah State star safety Shaq Bond last week: Boise State has landed a gem in Frank Maile, now the Broncos’ defensive line coach. Maile was interim head coach for USU the second half of last season, and Aggies players voted to boycott their season finale at Colorado State when they felt the university president had disparaged Maile. “Coach Frank is honestly one of my top two favorite coaches ever—very genuine, a players’ coach,” Bond said. “I think of all the blood, sweat and tears he put into Utah State. I was sad to see him go, but I was glad he went to Boise State, because that’s a great program, and I know they’ll take care of him.” Maile and the Broncos begin fall camp a week from today.

We’re still waiting to hear officially if Boise State will have one extra player in the quarterbacks room for fall camp. B.J. Rains of the Idaho Press tweeted Monday night that, according to a source, “Quarterback Colton Fitzgerald from Saugus High School in Santa Clarita, Calif., is expected to join the Boise State football team for the 2021 season.No word if this would be scholarship or walk-on. Boise State spokesman said no roster announcements until fall camp.” Right now there are just three scholarship QBs: Hank Bachmeier, Jack Sears and Taylen Green (plus Timberline walk-on Andy Peters).

If Derrick Alston Jr. is bubbling under in Thursday night’s NBA Draft, you can point to two things: his weight, and his late-season stats. Alston arrived at Boise State in 2016 weighing 148 pounds and scored a grand total of seven points as a redshirt freshman. He’s gained 40 pounds and 1,472 points since then, but he’s still a lot skinnier than your average NBA player. And how will his finish last season affect things? On February 25, Alston was coming off a four-game stretch during which he averaged 26 points and was on a roll. Then in the final five games of the season, Alston averaged less than 12 points, shooting under 33 percent from the field and going 7-for-34 from three-point range. The most likely route for Alston is to try to catch on in an NBA training camp, make an impression, and then prove himself in the G League.

Okay, admittedly we push the envelope to compile a “Team Idaho” in the Olympics. If that’s happened here, so be it. But equestrian Adrienne Lyle, a former Ketchum resident, was part of the USA Dressage team that won the silver medal Tuesday in the Grand Prix Special team final, the best finish in that event since 1948. Not forgetting Lyle’s horse, Salvino. Germany won gold, with the Americans edging out Great Britain, which took the bronze. Lyle, who competed in the 2012 London Games as well, has also qualified for the individual Grand Prix freestyle event today.

RICH HILL IS STILL ON THE HILL

The Boise Hawks are enjoying a deep breath after losing five of six games in Billings. They’re back home tonight to open a six-game series against Idaho Falls. It’ll be the Chukars’ first visit to Memorial Stadium. Meanwhile, the first former Hawk to make a stir at the MLB trade deadline was not the Chicago Cubs’ Kris Bryant, but 41-year-old lefthander Rich Hill, who was dealt to the New York Mets by Tampa Bay. Hill is seen as a five-inning starter as the Mets try to preserve their lead in the NL East. Opposing batters hit only .192 against his big, sweeping curveball with the Rays. So how far back does Hill go? He spent parts of two seasons in Boise—in 2002 and 2003.

July 28, 1976: Chicago White Sox pitchers Blue Moon Odom and Francisco Barrios combine to pitch a no-hitter against Oakland, the team for whom Odom pitched in three World Series in the early 1970s. Blue Moon was removed from the game after walking nine batters in five innings. It would prove to be the final major league victory of Odom’s career. The A’s, two years removed from their third straight championship, had seen most of their stars from that period leave via free agency or trades.