Koby McEwen has been almost as much a presence for Utah State as you-know-how has been for Boise State. And McEwen, the 2017 Mountain West Freshman of the Year and a preseason all-conference first-teamer, comes to town tonight to try to derail the Broncos. The 6-4 guard is the Aggies’ leading scorer at 14.3 points per game and had a 17-point half at Taco Bell Arena last season. As for Boise State’s star? Chandler Hutchison has added National Player of the Week honors from the U.S. Basketball Writers Association to his haul in the wake of his school-record 44 points against San Diego State last Saturday. And how about this? Hutchison is also Dick Vitale’s Player of the Week. He scored 21 and 18 points against Utah State last year, by the way.

No one not named Chandler Hutchison scored a point for Boise State until nine minutes had elapsed in the San Diego State game. And partly due to Hutchison’s monster performance, the Broncos logged exactly zero bench points. In this season of deep bench contributions, that can be chalked up as an aberration. Expect a lot more balance tonight against Utah State, especially if the Aggies put a bullseye on Hutchison. Alex Hobbs, after scoring 20 points in the win at Fresno State last week, went scoreless versus the Aztecs. That’s not going to happen again. Marcus Dickinson, who has scored only 15 points in the last five games, is due for a breakout. And beware Justinian Jessup.

Can I talk about Paris Austin for a moment? His departure from the Boise State basketball program last spring has created a very strange dynamic. Austin was fun to watch—a little hot-and-cold, but a great penetrator. At the end of last season, though, Austin decided he had to return to the Bay Area and is now redshirting at Cal. Have the Broncos replaced him on the court? It might be a push, although Lexus Williams has been a gamer, scoring 11 of his 16 points against San Diego State in the second half, including a huge three-pointer just after the Taco Bell Arena crowd was shown the video of coach Leon Rice wading across the river. Williams also dropped in a couple pressure-packed free throws with 1:09 left. What he did at the end of the Oregon game goes without saying.

Then there’s the locker room. Nothing against Austin, but the chemistry of the Boise State team this season is on another level. Rice has been pretty good at fostering chemistry on his teams, but there’s never been anything like this one. Williams and Chris Sengfelder, both one-and-done graduate transfers, have fit in really well. And fans can feel that, as attendance is on a serious upward trajectory. Prospects are good for another solid crowd tonight. The Broncos’ last two weekday games have seen 7,500-plus in Taco Bell Arena—and after what happened last Saturday, I think 8,500 would be a fair number versus USU.

Dating back to his playing days at Boise State, Pete Kwiatkowski has always been a guy to take one for the team. And he appears to have done that again, helping ensure that Jimmy Lake stays on Chris Petersen’s Washington staff by essentially trading places with Lake. Kwiatkowski will officially remain the Huskies’ co-defensive coordinator with Lake, but until now he had been the defensive play-caller. Lake will be in charge of that moving forward. Last season under Kwiatkowski, Washington ranked fourth in the nation in fewest yards allowed per play with 4.42. Both Kwiatkowski, one of the best defensive line technicians in the business, and Lake left the Broncos after the 2013 season to join Coach Pete in Seattle.

K.J. Carta-Samuels, a one-time Boise State quarterback commit who was among the group that reneged four years ago and followed Petersen to Washington, has joined UCLA as a graduate transfer after announcing in December that he would leave the Huskies. Carta-Samuels has been stuck behind Jake Browning the past three years and has thrown for just 310 yards in 25 games. He has one season of eligibility remaining. One of the Bruins QBs Carta-Samuels will be competing against is Boise State wide receiver Sean Modster’s brother, Devon.

It’s hard to fathom what the Washington State football program is feeling right now. Pullman police found sophomore quarterback Tyler Hilinski dead of a self-inflicted gunshot wound yesterday. Hilinski was the heir-apparent to Luke Falk as the Cougars starter. It was Hilinski who keyed WSU’s rally from a 31-10 fourth-quarter deficit against Boise State in September, throwing for 240 yards and three touchdowns in the second half and overtime in the Cougars’ three-OT 47-44 win over the Broncos.

A column last weekend by Bob Condotta in the Seattle Times points to the inability of the Seahawks to draft and develop talent up front as the key to offensive line coach Tom Cable’s firing last week. Rees Odhiambo is one of the draft picks that has not broken out yet. Writes Condotta: “The former Boise State standout played sparingly as a rookie and became the left tackle this year after the injury to George Fant, but was then benched after the trade for Duane Brown, and then was put on IR with wrist/hand issues. Maybe he can thrive with a new coach, but at the moment it’s hard to tell where he fits into the team’s long-range plans.” Cable, meanwhile, has landed in Oakland as Jon Gruden’s new O-line coach.

A number of former Boise State players who were once coached by Chuck Pagano have posted on Facebook (and liked) a story about Pagano placing a full-page ad in the Indianapolis Star, thanking Colts fans for their support the past six years. It was a very unusual move for an NFL coach who had just been fired. But that’s who Pagano is. In the ad he addresses his battle with leukemia less than a year into his tenure—and the incredible support from Indy that followed. Pagano was an assistant with the Broncos in 1987-88 and will forever be tied to Boise through the Heffner family (he’s married to the former Tina Heffner). He handled his departure from the Colts with pure class.

In a comedy of errors, the Baltimore Colts defeat the Dallas Cowboys, 16-13, in Super Bowl V. The game was marred by 11 turnovers and a slew of penalties. The day’s most spectacular play happened in the second quarter, when Colts tight end John Mackey caught a tipped pass and romped 75 yards for a touchdown. Jim O’Brien booted a 32-yard field goal with five seconds left to give Baltimore the victory—at least some consolation for the shocking loss to the New York Jets in Super Bowl III in 1969. 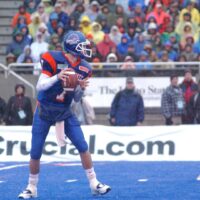 This Day In Sports: Dinwiddie’s debut TD – and a deeper dive