How appropriate that Boise State’s first Mountain West Defensive Player of the Year is Leighton Vander Esch. Many among us have been rooting for Vander Esch since he was invited as a preferred walk-on in 2014. And yesterday as a Bronco junior, he reached the mountaintop (pun intended). Here’s an eight-man football player from Salmon River High who developed into a starter and a captain, and he’s one of the top 25 tacklers in FBS college football at 9.4 stops per game (113 total). Vander Esch also has three sacks, two interceptions and three forced fumbles. Vander Esch is Boise State’s first conference Defensive Player of the Year since fellow Idahoan Korey Hall earned the WAC’s top honor in 2006.

Even 3½ years ago, there were believers. Vander Esch was head-and-shoulders above any other athlete at the 1A level, so much so that you knew there had to be something to the pride of Riggins. In his final 16 months of high school, Vander Esch led the Salmon River Savages to 70 wins and four state 1A championships in football and basketball. As a senior, he left an indelible mark on the state tournament by scoring a record 93 points over the three days. Vander Esch set a mark with 37 points in the title game, a 63-59 victory over The Ambrose School. The only thing left for him to do was beef up that wiry frame. When Vander Esch graduated from Salmon River, he was 6-4, 185 pounds. When he walked on at Boise State, he was asked to gain 30 to 40 pounds for a future at linebacker. He’s now a stout 240.

In addition to Vander Esch, five other Boise State players made first-team All-Mountain West, all of them first-timers. Leading the group is tight end Jake Roh, who has had a career year—and, as he fights through a foot injury, may or may not play in the Mountain West championship game Saturday night versus Fresno State. Also named were center Mason Hampton, wide receiver Cedrick Wilson, cornerback Tyler Horton and STUD defensive end Curtis Weaver. Roh, Hampton, Wilson and Horton are all seniors, while Weaver is the first freshman in Mountain West history to earn first-team honors on defense. For Wilson, it’s validation after he was curiously left off the Preseason All-Mountain West team.

Other nuggets from the Mountain West all-conference selections: Fresno State’s Jeff Tedford is Coach of the Year (do ya think?), but the Bulldogs were shut out in the conference’s first-team honors on offense, and they only had one first-teamer on defense. Like, Fresno State needs more stuff to protest going into Saturday night’s game? The first-team quarterback was Colorado State’s Nick Stevens, and second-team was Boise State’s Brett Rypien. That left the MW Preseason Offensive Player of the Year and trendy pick as a first-round NFL Draft pick, Wyoming’s Josh Allen, as honorable mention. San Diego State’s Rashaad Penny was the pick as both Offensive Player of the Year and Special Teams Player of the Year. And deservedly so.

Jonathan Smith has been in a good place the past six years, working as a quarterbacks coach for Chris Petersen—two seasons at Boise State and four at Washington. Smith is also currently the co-offensive coordinator for the Huskies, but he’s about to get way out of his comfort zone. He’s taking over one of the most challenging jobs in the Power Five: head coach at Oregon State. The Beavers went 1-11 this season, with coach Gary Andersen abandoning ship midway through. But OSU is Smith’s alma mater, the place where he rose from local walk-on to Fiesta Bowl quarterback, helping lead Dennis Erickson’s 2000 team to an 11-1 season and a win over Notre Dame in the Fiesta Bowl.

Former Boise State star Jeremy McNichols, has been activated from the practice squad by the San Francisco 49ers and could see his first NFL action against the Bears Sunday in Chicago. It’s been a longer and rougher road than expected for McNichols, who was drafted in the fifth round last spring by Tampa Bay. Things unraveled for him during the preseason with the Buccaneers, especially in a loss to Cleveland, when he entered the game and lost a yard on a rushing attempt—and then missed a block in pass protection on the next play, leading to a sack. Bucs coach (and former Boise State head man) Dirk Koetter promptly pulled him. McNichols was cut by Tampa Bay on Labor Day weekend, but instead of joining the Bucs’ practice squad, he opted to go the same route in San Francisco.

Graduate transfers are interesting specimens in college hoops. It’s the way of the world these days. And sometimes you strike gold. Boise State appears to have done it with Christian Sengfelder and Lexus Williams. Sengfelder seemed like a logical replacement for Nick Duncan, but he’s been so much more than that since coming in from Fordham. Sengfelder scraps. He had as many rebounds Tuesday at halftime—eight—as the entire Loyola Chicago team. The German finished with his first double-double as a Bronco, 10 points and 12 boards. Williams has found his shot now, and sometimes he takes over the floor defensively. The former Valparaiso guard just about brought down the house Tuesday with a high-flying, acrobatic block. Can Williams can take that defensive energy to Oregon tomorrow night?

Brady Bassart scored two goals last night, the second with 1½ minutes left in regulation to tie the game, and the Idaho Steelheads went on to beat Tulsa 4-3 in a shootout at CenturyLink Arena. Both of Brassart’s scores were on the power play, giving the Steelheads six goals on the man-advantage over the past two games. Goalie Philippe Desrosiers got the win, his fourth in a row—he is now 6-0-1 in CenturyLink Arena this season.

The General is going international again. Boise State men’s tennis coach Greg Patton will coach the USA squad at the 2017 Master’U BNP Paribas International Collegiate Team Championship beginning today in Marcq-en-Baroeul, France. This is Patton’s ninth year as co-head coach of the Americans in what’s billed as the Davis Cup of college tennis—he’ll be sharing duties with Ohio State women’s coach Melissa Schaub. In Patton’s eight previous trips to France, the USA has won seven titles, including the past six in a row. The field also includes Belgium, China, France, Germany, Great Britain, Ireland and Russia.

In one of the most amazing turnarounds in college football history, Notre Dame takes a 24-0 lead over USC in the second quarter and watches a disaster unfold. Behind tailback Anthony Davis, the Trojans roared back to score eight unanswered touchdowns in the next 16 minutes and trounce the Fighting Irish, 55-24, at the LA Coliseum. Davis scored six TDs during the rally. 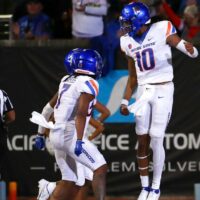