Since the 2016 Cactus Bowl has become a thing for the Boise State defense this week, I shall dive in. The Broncos played a Baylor team that had lost six games in a row in the season following the firing of Art Briles over the scandal involving violence against women by Bears players. Briles’ son, Kendal, remained as offensive coordinator under interim coach Jim Grobe. Despite the fact the Bears program was dysfunctional by the time it finished the regular season, it rose up and smacked Boise State 31-12. Suddenly, the Baylor tempo offense clicked again, and it befuddled the Broncos defense. And that’s been a focus as Saturday’s Florida State game approaches. Briles is, of course, the new O-coordinator for the Seminoles, and he has brought his unconventional no-playbook offense to Tallahassee.

So what the heck happened that night at Chase Field in Phoenix? Boise State actually stopped Baylor’s first two drives, one on an interception and the other on downs. But in the end, the Bears rolled up 515 yards. The Broncos were okay against the run, allowing 3.3 yards per carry. But quarterback Zach Smith had his way through the air, throwing for 375 yards on 9.4 yards per attempt. Boise State actually ran off six more plays than Baylor but could not get out of drives—he Bears converted 53 percent of their third downs. Coach Bryan Harsin acknowledges his scout team can’t run the Briles offense as well as the Seminoles do, making preparation hard. “We’ll do everything we can to simulate that tempo,” said Harsin.

Nobody wants to be the Little Boy Who Cried Wolf, but we need to at least be aware. Tropical storm Dorian could hit hurricane strength today before reaching Puerto Rico. The latest NOAA map shows the fringes of Dorian reaching Jacksonville Sunday afternoon. Everybody’s thinking the same thing. Could weather preempt two consecutive Boise State games? Two pretty important ones at that? Like Chris Lewis said on Idaho SportsTalk Tuesday, we hope ServPro is not the sponsor of this game. ServPro sponsored the First Responder Bowl the day after Christmas, with the now-infamous slogan, “Like it never even happened.” I don’t see that on ServPro’s website now. Unlike the First Responder Bowl, could the Broncos and Seminoles play early Saturday or even Friday night? It’s not too soon to think about it.

A LOCAL YOU CAN LATCH ONTO

There’s no Keegan Duncan to root for anymore at Boise State, but you could always go for Scott Matlock. The former Homedale star is listed as David Moa’s backup at defensive tackle. Bronco Nation is should pull for Matlock for a lot more than his Treasure Valley roots. Harsin talks about Matlock in terms of skill, work ethic and character, but you’ve probably heard his back story. As a 13-year-old living in Boise, he lost his mom and dad within a five-month period in 2013. Matlock went into foster care but was later adopted by a Wilder couple and attended Homedale High. He also emerged from his journey with the help of his brother, Steven, a four-year starter on the offensive line at Idaho. Watch for No. 62 on Saturday.

WILSON’S VERSATILITY COULD PAY OFF

If Cedrick Wilson makes the Dallas Cowboys roster, it may be special teams that gets him over the hump. The former Boise State star has been fine as a wide receiver in the preseason, working around a concussion from an illegal hit—he has six catches for 73 yards on seven targets and has been moving the chains as he battles Devin Smith for the Cowboys’ final wideout spot. But Wilson has also returned four punts for 53 yards, including a 32-yard dash against the Houston Texans last Saturday. He also has one kickoff return for 15 yards. Wilson averaged 13.2 yards per punt return and 23.9 yards on kickoffs during his two years with the Broncos. Dallas hosts Tampa Bay Thursday night in its final preseason game. Saturday is NFL Cutdown Day.

HOPING TO HYPE THE HOOPS SLATE

The Boise State men’s basketball schedule is finally out, and there’s one marquee home game in fans’ minds—that’s against BYU on November 20. The players’ perception is there are at least two, as they’ll surely include the matchup against UC Irvine five days before the Cougars’ visit. The Anteaters went 31-6 last season and reached the second round of the NCAA Tournament. There are some good road nuggets, as the Broncos go to Oregon on November 9 and open the Diamond Head Classic against Georgia Tech during Christmas break. The oddity is the Mountain West interruption in early December, as Boise State plays at New Mexico and in ExtraMile Arena versus Colorado State. That’s because the MW Tournament is a week earlier next March due to a massive convention in Las Vegas.

We couldn’t forget Allie Ostrander even if we tried. The former Boise State superstar runner, who was already the three-time Mountain West Women’s Athlete of the Year, was named MW Female Scholar-Athlete of the Year on Tuesday. It takes that first award one step further, recognizing Ostrander’s academic prowess and community involvement. Meridian’s Mason Hampton, a Broncos football standout, won the conference Men’s Scholar-Athlete of the Year award in 2017-18. Also, the Broncos’ Raimee Sherle was named Mountain West Women’s Soccer Offensive Player of the Week for the seventh time in her career on Monday after netting three goals in the first two games of the season last weekend, both Boise State victories.

STEELHEADS GET NAAS BACK

On the local pro sports front, Spencer Naas has agreed to terms for a return to the Idaho Steelheads for the upcoming season after a rookie campaign that saw him score 18 goals and add nine assists. The 24-year-old forward also played 10 games with the AHL’s Texas Stars last season, so he did draw plenty of interest on the ECHL market this summer. “When it came down to it, I’ve been talking to a lot of other teams, but I had the most familiarity with the guys and fans in Idaho, and I thought it’d be a good fit to come back,” said Naas.

This Day In Sports…brought to you by WESTERN SIDING…if you don’t call ‘em today, they’ll be here tomorrow!

August 28, 2014, five years ago today: The earliest game in Boise State history results in the earliest loss, a 35-13 defeat at the hands of Ole Miss in the debut of new Bronco coach Bryan Harsin at the Chick-fil-A Kickoff in Atlanta. The Rebels were clinging to a 7-6 lead at the end of the third quarter before exploding for four touchdowns in the fourth. Jay Ajayi logged 12 receptions, the most ever by a Bronco running back. Grant Hedrick completed 36 passes, second-most in school history, but he also threw four interceptions. Shane Williams-Rhodes had 14 catches, tied for third on the Boise State single-game list, but they covered only 53 yards as Boise State’s offense had trouble going vertical. 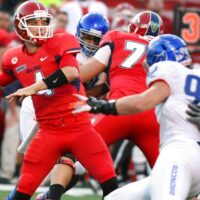 This Day In Sports: Broncos introduce themselves to Derek Carr