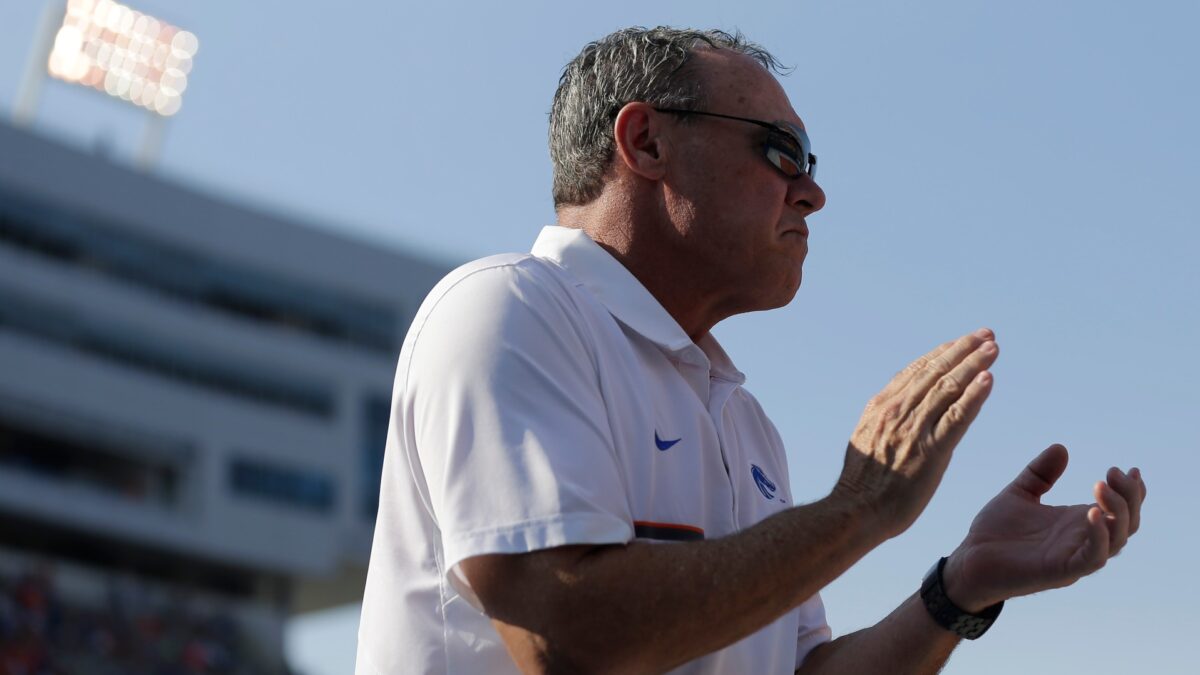 The regularly-scheduled preview of Saturday night’s Boise State-Utah State game is preempted (at least off the top) by Wednesday’s bombshell announcement that Curt Apsey has resigned as the school’s athletic director and will take a position in fundraising at the university.Whose idea this was is a matter of debate, and the timing is certainly odd—three days before the pandemic-delayed 2020 football season kicks off. But these past seven months have not been fun for anybody. Apsey has had to deal with millions of dollars in lost revenue and the resultant axing of the baseball and women’s swimming and diving programs. Most recently it’s been the controversy over denying parents of players and coaches the chance to watch the games in Albertsons Stadium (at least this first one).

Whether this Boise State fundraising position is just a placeholder until Apsey finds something else remains to be seen, but you can’t say it’s not a good fit. As an assistant athletic director, Apsey was key to facilities upgrades, most visibly the Steuckle Sky Center that opened in 2008. Apsey struck while the iron was hot. To be sure, plans for that stadium addition were already well underway, but when Boise State beat Oklahoma on New Year’s Day 2007, Apsey made sure the groundbreaking shovels were in the dirt for the Steuckle on Valentine’s Day. Earlier in the decade, when the Broncos became a Top 25 regular, Apsey jumped on generating support for the Caven-Williams indoor facility. Following the Steuckle Sky Center was the Arguinchona Basketball Complex—then the massive Bleymaier Football Center.

Bob Carney, Boise State’s Senior Associate Athletic Director for Strategic Planning and Capital Projects since 2018, moves into the interim AD’s chair. Carney has been with the university since 2005 and said he may apply for the position depending on how things go in the near-term. As much as just about every last person in Bronco Nation envisions Chris Petersen as the next AD, I’m certain he does not. Petersen got out of football last December for a reason, and he’s perfectly set up now to call his own shots as a consultant and a public speaker—touching all walks of life. And Petersen will make a lot more money doing that. There is a lot of buzz for Brad Larrondo, a Bronco lifer who is currently a Senior Associate Athletic Director and is Chief of Staff for football. Larrondo knows the program inside-out.

NOW, WHERE WERE WE?

It is October, you know. Did you know that Boise State is 73-7 in October since 2000, the best mark in the country during the month of October in this century? There was a 50-game winning streak in there from 2001-13. Among the victories were the epic upset of Fresno State in 2001 (and the rout of the Bulldogs the year after), and the four-overtime classic against Nevada in 2007. For purposes of Saturday night’s opener against Utah State, included is a 36-1 record on the blue turf during the month of October.

THE AIR UP THERE

Boise State is tall at safety, but its starting cornerbacks are more average height—Avery Williams at 5-9 and Jalen Walker at 6-0. The Broncos coaching staff is, therefore, dialing up ways to deal with Utah State wide receiver Jason McGriff, who measures 6-6, 220 pounds. That’s a matchup issue right there. Does Boise State slide 6-4 JL Skinner or 6-2 Tyreque Jones over to help? McGriff played junior college ball last year at ASA College in Miami after spending a redshirt year at Nebraska. Interestingly enough, USU’s other two starting wideouts are 5-8 Jordan Nathan and 5-7 Deven Thompkins.

Let’s touch on Avery Williams as he enters his senior season at Boise State (or the first of two, as the case may be). His perch as a team captain is appropriate. Williams was the Broncos’ Scout Team Special Teams Player of the Year in 2016. That was an omen. But the first time we really heard Williams’ name was during spring football in 2017, when he was still a walk-on. He was named a captain of one of the teams in the Spring Game nevertheless, and on the field he notched the only turnover of the game, an interception of Brett Rypien. That September, Williams had the Broncos’ first touch of the 2017 season, and he took a punt return back 81 yards for a touchdown against Troy. His leadership skills have aged like a fine wine.

John Hightower’s rookie season is at a crossroads in Philadelphia. The former Boise State star had one catch for 50 yards in Philadelphia’s 30-28 loss to Baltimore, but he had one big drop that has given him a lot of grief. That’s what beat writer Jeff McLane focused on in the Philadelphia Enquirer. “Catch. The. Ball. That’s your No. 1 job when you’re a receiver,” writes McLane. “Hightower dropped a deep pass that could have given the Eagles an early lead or at least set up a score. It’s becoming increasingly clear why the rookie wasn’t drafted until the fifth round.” Thing is, that wasn’t a Hightower trait at Boise State. I don’t remember many drops. Experience will matter for Hightower. Methinks he’ll get past this. He’ll have a chance to start the process tonight against the New York Giants.

ROSTER ON THE RADAR

There’s a lot of buy-in to Leon Rice’s collection of Boise State men’s basketball talent. Jeff Goodman of Stadium has updated his Preseason Top 50 for 2020-21. Goodman has the Broncos at No. 46, the only Mountain West team on the list. Boise State’s Opening Night opponent on November 25 is, well, quite a bit higher. The Kansas Jayhawks are No. 5. “Patiently waiting,” tweeted Broncos guard Marcus Shaver Jr. Wednesday night. Shaver has certainly been patient. He hasn’t played in a game since March 7, 2019, for the University of Portland.

October 22, 2016: The Curse of the Billy Goat is lifted, as the Chicago Cubs make the World Series for the first time in 71 years when they beat the L.A. Dodgers 5-0 in Game 6 of the National League Championship Series. The Curse was legend, placed on the Cubs by a Chicago tavern owner who was ejected from the 1945 World Series because of the odor of the goat he had brought with him to Wrigley Field. The modern Cubs had been favorites for the pennant all season and responded by winning 103 games. The NLCS co-MVP’s were pitcher Jon Lester and second baseman Javier Baez, a one-time Boise Hawk.

Hutch providing much to the Broncos