How can Boise State possibly win Saturday night in Logan? Since January 18, the Aggies have been fit to be tied after letting the Broncos get away in ExtraMile Arena. In one of the most memorable comebacks in any Boise State sport, the Broncos rallied from an 18-point hole with 4:10 left in the game to tie USU at the end of regulation—and win 88-83 in overtime. It was RayJ Dennis who scored all 19 of his points in the final 3½ minutes of regulation. Dennis hasn’t done anything like that since, but he’s forever etched into Bronco lore. As for the Aggies, this was the ultimate indignation, and they’ll never forget it. To say they can’t wait to get Boise State in their place is an understatement. The only way for the Broncos to counter that is to play their best game of the season.

THE ROAD TO 20 A LITTLE LESS BUMPY

Going into the Utah State game three weeks ago today, I tried to handicap Boise State’s chances of getting back to a 20-win season after the first 20-loss campaign in school history a year ago. At that point, the Broncos were 11-8 overall and 3-4 in the Mountain West and were limping home after a loss at Air Force. Sure looked like a long shot, but the perception has changed as the team has rolled off a five-game winning streak. Now, with at least seven games left, Boise State has to go at 4-3 or better the rest of the way to get to 20 wins. That’s doable, whether the streak is snapped Saturday night or not. And did you know? The Broncos clinched a winning season Tuesday night in Laramie. That has to feel good after last year.

THE CALL FOR THE HALL

There are six new members of the Boise State Athletic Hall of Fame to be inducted on Friday, September 4. The university is still playing catch-up after an 11-year Hall hiatus ended in 2018, so there could have been, like, 12 inductees. But they’re trying to keep it manageable. The new faces are former athletic director Gene Bleymaier, plus athletes Korey Hall from football, Emma Bates and Kurt Felix from track and field, Ben Cherrington from wrestling, and Luke Shields from men’s tennis. Very cool that a wrestler is going in. It’s been almost three years since Boise State dropped wrestling in favor of baseball, and some frayed feelings remain. But Cherrington, the 2006 national champion at 157 pounds, is going to return to campus and accept the honor.

So who do we pick as the headliner? I’m going with Bleymaier. We could do a whole column on him. He was fired by President Bob Kustra in 2011, but that never took away from his legacy. Bleymaier spent 29½ years as Boise State’s AD. The Broncos and Boise were his life. Bleymaier graduated from Borah High in 1971, then went on to star as a tight end at UCLA and later earned his law degree there. He returned to Boise in 1981 as Boise State’s assistant athletic director and was promoted to AD a year later—ironically when the school fired Mike Mullally.

The athletic program that Bleymaier took over in 1982 is hardly recognizable today. Boise State was in just its 14th year as a four-year school. It was Division I-AA in football and was finishing its final basketball season in 3,600-seat Bronco Gym. From there, Bleymaier saw the grand opening of what is now ExtraMile Arena, masterminded the installation of the blue turf in Bronco Stadium in 1986, guided the Broncos through their move to Division I-A and the Big West in 1996 at the same time coach Pokey Allen was dying of cancer, founded what is now the Famous Idaho Potato Bowl, and—through a series of coaching hires—presided over Boise State’s rise to the top 10 ranks in college football, a story that will not be repeated.

This Hall of Fame class has a bit of everything. Hall is the only football player, as Boise State works through a backlog of worthy candidates in that sport. Before going on to the Green Bay Packers as a fullback, Hall was the heart and soul of the Broncos defense the season they first won the Fiesta Bowl, magnified by his 2006 WAC Defensive Player of the Year award. Bates and Felix were national champions in the 10,000-meters and decathlon, respectively. And Shields was Boise State’s only three-time All-American in men’s tennis, earning 2007 WAC Player of the Year honors. He’s currently the head coach at Fresno State.

The Idaho Steelheads’ homestand continues with a pair of games against Utah this weekend. Season after season, it seems that these two teams play half the schedule against each other. But the Steelheads are hosting the Grizzlies for just the second time this season and the first time since November 1. The Steelies have been shaky lately, winning just two of their past seven games. The good news: Idaho’s penalty kill has been perfect the past six games, going 17-for-17. In their last 20 games, the Steelheads are 63-for-68 and now sit in fourth in the ECHL on the season at 86.6 percent.

Meridian’s Troy Merritt turned in his best opening round on the PGA Tour since the RSM Classic in November, carding a three-under 69 to kick off the AT&T Pebble Beach Pro-Am on Thursday. Merritt shook off back-to-back bogeys in the early going at Spyglass Hill and banked four birdies on the back nine to end the day tied for 24th. He’s looking to play the weekend for just the second time in the new year.

Utah State was 0-7 in the Mountain West when the Boise State women visited Logan three weeks ago, but the Aggies made the Broncos work for a 65-59 victory. The return match is Saturday afternoon in ExtraMile Arena. Riley Lupfer regained her shooting touch Wednesday night against Wyoming, putting up 18 points and moving into fifth on Boise State’s career scoring list with exactly 1,400 points. That’s nice, but as you might expect, Lupfer is more about reaching a fourth straight NCAA Tournament with her teammates. It ain’t over yet. “Records, yeah yeah,” said Lupfer. “But I feel like, we’ve already had three titles, and that says more about our program than going up a scoring list.”

February 7, 2009: Sports Illustrated drops a bombshell on baseball, reporting that the game’s highest-paid player, Alex Rodriguez of the Yankees, tested positive for steroids in 2003. At the time of the test, Rodriguez played for the Texas Rangers and was en route to his third straight American League home run title and first Most Valuable Player award. Later in the month A-Rod would admit using steroids during his three-year stint with the Rangers, casting suspicion on what was assumed to be a clean run to baseball’s career home run record held by the already-tarnished Barry Bonds. Rodriguez, forever tainted, was suspended for the 2014 season and finished his career in 2016 with 696 home runs. 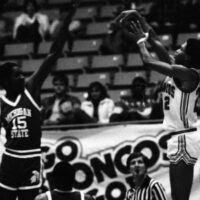 This Day In Sports: The brand new house for Broncos hoops