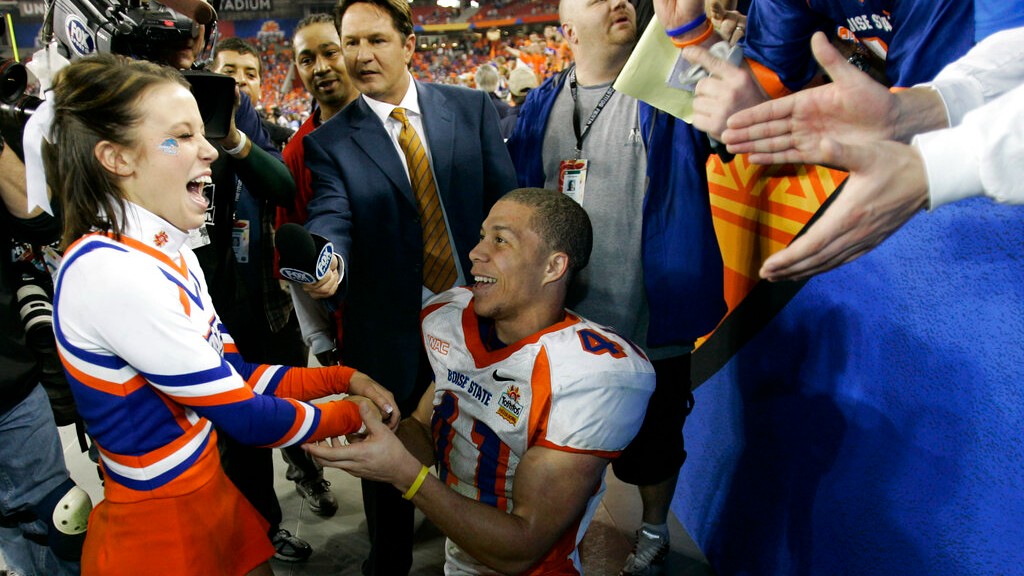 Chris Vannini (who was a guest with Prater & The Ballgame last week) writes at The Athletic about the demise of the European Super League proposal in soccer versus the possibility of one in college football. Vannini shares this from British colleague Adam Crafton after the collapse of the European scheme: “Players and coaches so often ignore their club’s defects, accepting the (dollar) signs and lowering their moral compass. But along came a plan that struck at the heart of their childhood love of football: the right to dream, the right to aspire, the right to compete.”

Here’s the part of that Crafton observation that hits home: “As much as their owners may have resented it, players at clubs such as Manchester United and Chelsea speak privately of their admiration of Leicester City’s 2016 title victory. These players are football fans, like the rest of us, and even they are invigorated by the ever-decreasing number of upsets.” A college football Super League will greatly decrease the David vs. Goliath matchups on the big stage. Will we ever see a Boise State-Oklahoma story again? The Broncos were Leicester City 15 years ago. Does anyone who loves the sport really want to lose that?

New Boise State offensive coordinator Tim Plough talked about the quarterback battle between Hank Bachmeier and Jack Sears last week. It begins in earnest this week, as fall camp opens on Wednesday. Plough contrasted their leadership skills, noting the Bachmeier is “fun-loving” and Sears is the guy with the “old soul.” He feels it’s a pretty good combination. Now, can Plough be the quarterback whisperer who can bring out things we’ve never seen? The Broncos QB room is in unfamiliar territory right now. After getting a first-team Preseason All-Mountain nod from Phil Steele last year, Bachmeier was fourth-team this season behind Nevada’s Carson Strong, San Jose State’s Nick Starkel and Fresno State’s Jake Haener. Plough’s new offense could provide Bachmeier (and Sears) the chance to shake that up.

As Kellen Moore goes into his third year as Dallas offensive coordinator, the Cowboys fan sites have shifted gears. One of the most popular ones, BloggingTheBoys.com, isn’t wondering why a guy who started only two NFL games at quarterback is designing plays for Dak Prescott, as so many did at the outset. Now writer Brian Martin compares Moore’s career path to that of former Cowboys coach Jason Garrett, who was the team’s O.C. for four seasons before becoming head coach. “Despite the fact Mike McCarthy was hired last season to be Garrett’s replacement as Dallas’ new head coach, there could be someone waiting into the wings being groomed to take over that job title in the not-too-distant future,” writes Martin, who speculates it is Moore. Speculation, yes. And interesting, yes.

ALSTON BY THE BAY

After going undrafted last Thursday night, Derrick Alston Jr. was snapped up the following day for a spot on the Golden State Warriors summer league team. The former Boise State star will get his first audition at the 3rd annual California Classic Summer League in Sacramento, with games on Tuesday and Wednesday. The teams consist of rookies selected in the 2021 NBA Draft and players competing to make NBA and G League regular season rosters. Former Broncos teammate Justinian Jessup, the Warriors’ second-round pick last year, was already slated for the event. The Warriors have invested time and money in Jessup, sending a scout to Australia to scout him during the NBL season when he starred for the Illawarra Hawks.

BRYANT BY THE BAY

The transaction wire came alive at the trade deadline Friday, and former Boise Hawk Kris Bryant was one of the lead stories. Bryant was dealt by the Chicago Cubs to the San Francisco Giants, inserting him right into the National League pennant race. He homered in his second at-bat with the Giants Sunday as they downed Houston 5-3. Other prominent Hawks alums with changes of address: Javier Baez from the Cubs to the New York Mets, Kyle Schwarber from the Washington Nationals to the Boston Red Sox, and Josh Harrison from the Nationals to the Oakland A’s. The first ex-Hawk in the parade was lefthander Rich Hill, who went from Tampa Bay to the Mets last Thursday.

Rainouts at Memorial Stadium are extremely rare. The monsoonal moisture Saturday night merely interrupted the Boise Hawks’ game against Idaho Falls, but there was no way the contest was going to continue. “The rain hit crazy fast, everyone was scrambling and we had to close our window because it was dumping on our equipment,” said Hawks play-by-play man Leonard Barry. Hawks general manager Mike Van Hise slipped while helping the field crew pull the tarp over the infield, and it slid right over him. The Saturday night game picked up Sunday in the fifth inning, with the Chukars finishing off an 11-6 seven-inning victory. Then Sunday’s regularly-scheduled game was reduced to seven innings, and Idaho Falls won again 6-3.

THE PASSING OF JAY PICKETT

Saddened to hear of the sudden death of Jay Pickett, the accomplished actor and screenwriter who played a year of football at Boise State in 1982 before pursuing his acting dream at UCLA. Pickett died suddenly on Friday in Owyhee County on the set of a new movie he wrote and was starring in called “Treasure Valley.” Three different Pickett brothers from Vallivue High played for Boise State. Dee, the future PRCA Hall of Fame cowboy, was a quarterback for the Broncos in 1976-77. And Rich lettered as a defensive back in 1981. Jay Pickett was 60 years old.

August 2, 1961, 60 years ago today: On the heels of Frank McGuire’s resignation, North Carolina promotes Dean Smith to head basketball coach of the Tarheels. Smith would go 8-9 in his first season—but it would be the only losing campaign in 36 years of coaching in Chapel Hill. Inducted into the Basketball Hall of Fame in 1983, Smith would step down after the 1996-97 season with 879 career victories—fifth in Division I history behind Mike Krzyzewski, Jim Boeheim, Bobby Knight and Roy Williams.