I saw this in the Deseret News: “Proposal: BYU joins league with Utah.” I read on, and it was about a proposal from FBSchedules.com that suggests an eight-team College Football Playoff bracket (no surprise)—and, splitting up the Power 5 conferences and add independents like Notre Dame, BYU and Army and select other non-Power 5 programs into seven, 11-member leagues that are geographically based (intriguing). You can understand how that would excite Cougars fans—to finally be on the same footing as the Utes again. But who are the “select other non-power 5 programs”? Here’s what they call the “Pacific Conference”: Boise State, BYU, Cal, Oregon, Oregon State, Stanford, UCLA, USC, Utah, Washington, and Washington State.

The other Group of 5 programs that made the cut in this proposal are Air Force, Houston, Cincinnati, Memphis, Navy, UCF and USF, plus a couple of either/ors: SMU or Colorado State, and Northern Illinois or Toledo. Essentially, the new Power 5 would include 77 schools. Each new league would operate by the same standards (with teams playing 10 conference games each). The seven league champions would make the CFP Playoffs, plus one at-large team. Could this actually happen? The Group of 5 teams left behind would fight this to the bitter end. I don’t know how much clout FBSchedules.com has with anybody, but it’s fun to throw it out there during a slow time of the year.

In this FBSchedules.com scenario, Colorado State would definitely bump SMU if the Rams keep raising funds like they did yesterday. CSU announced naming rights for the new stadium it opened last year, selling the package to Public Service Credit Union of Colorado for $37.7 million over 15 years. Fortunately for all concerned, the credit union is rebranding itself and will probably have a more manageable name by early June. But even after a hefty commission is paid to Learfield Sports for pulling the deal together, this is a healthy windfall for Colorado State. In 2014, Boise State also sold 15-year naming rights to its stadium, getting $12.5 million from Albertsons. Let’s just say Albertsons has a heckuva deal, as the blue turf has a much higher national profile than the facility in Fort Collins.

College of Idaho spring football wraps up with the annual Purple & Gold Game tonight at Simplot Stadium. The Coyotes will give fans a preview of their one-two punch in the ground game. One of them is a quarterback, returning starter Darius-James Peterson, who rushed for a C of I QB record 1,011 yards and 12 touchdowns last season. The other is running back Nick Calzaretta, who averaged over five yards a carry and scored 10 TDs last year as a true freshman. There’s competition everywhere on defense, where the Yotes return only four starters. C of I is coming off its first winning season since reinstating football in 2014.

With Idaho in an out-and-out rebuild at quarterback and wide receiver, the Vandal running game has taken on added importance this spring. With 1,000-yard rusher Aaron Duckworth having departed, Isaiah Saunders is poised to be the main man. Saunders rushed for 506 yards and two touchdowns last season, but he logged 731 yards and nine TDs in 2016, including a 147-yard, three-score performance in Idaho’s Famous Idaho Potato Bowl victory. But there’s not much depth in the backfield—yet, anyway.

The only other returning Idaho running back who had a carry last year is Dylan Thigpen—10 attempts for 17 yards. Thigpen and Roshaun Johnson received most of the carries in the backfield in the Vandals’ first spring scrimmage last Friday. Thigpen had the play of the day, shooting through an opening in the O-line and beating several speedsters in the secondary in a footrace for a 67-yard touchdown. Thigpen, a 5-11, 205-pound sophomore, graduated from Damien High School in LaVerne, CA, same as former Boise State star Ian Johnson.

Idaho has bought some time in an effort to balance its athletics budget, so women’s soccer, men’s golf and women’s swimming and diving are safe for now. The State Board of Education has granted a waiver to the Vandals, and theoretically they’ll have another year to sort things out. UI’s reported deficit this fiscal year is just under $1 million, which is a drop in the bucket compared to other schools we read about. New Mexico, for example, has a projected athletics deficit of $3.3 million this fiscal year and has not posted a balanced budget in nine of the last 11 years. And the Lobos were already in a $4.7 million hole. The Vandals deserve to be cut some slack here.

The Idaho Steelheads have trailed in a Kelly Cup Playoff series 3-0 four times previously in their ECHL era. On all four occasions, they ended in sweeps. The Steelheads try to avoid that ignominy tonight as they face elimination in Game 4 of their first-round series against Allen. The Steelies have won just one ECHL series when trailing 2-0—that happened in the first round of the 2004 playoffs, when they overcame that deficit against Las Vegas in a best-of-five series. Idaho went on to win its first Kelly Cup. These days, the Steelheads would just like to taste the second round, something they haven’t done since 2014. And now it’s as close to impossible as can be.

A couple other items—for the third straight season, junior Shani Remme will represent Boise State with an individual berth in the NCAA Women’s Gymnastics Championships. Remme, a two-time MRGC Gymnast of the Year, will compete in the all-around tonight in St. Louis. And former Bronco star Troy Merritt carded three birdies over the final seven holes yesterday at the Valero Texas Open. But Merritt also absorbed three bogeys, and he finished the first round with a one-over 73. He’ll need a solid Friday to make the cut in San Antonio.

An historic day for baseball stadiums, as Fenway Park opens in Boston, with the Red Sox beating the Yankees, 7-6. Tiger Stadium opened in Detroit on the same day, with the Tigers edging the Cleveland Indians, 6-5. And on April 20, 1916, it was the first Chicago Cubs game ever played at Wrigley Field, then known as Weeghman Park, with the Cubbies downing the Cincinnati Reds, 7-6. 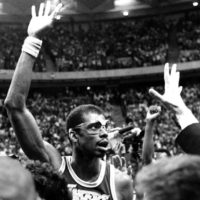 This Day In Sports: Kareem becomes the NBA scoring king