Three years ago, Chandler Hutchison caused some consternation for Bronco Nation when he declared early for the NBA Draft. But Hutchison knew exactly what he was doing. He was evaluated by NBA clubs while working out for them and received invaluable guidance on his game. Hutchison didn’t hire an agent, and he was able to return to Boise State for his senior year. And that final season paved the way for the 22nd overall pick by the Chicago Bulls in the 2018 draft. It would be a nice blueprint for Bronco junior Derrick Alston. But between now and the May 29th deadline for early entrees to pull out of the draft, it’s unlikely that any workouts or in-person analysis will take place, so what’s in it for Alston? The only reason for him to declare is if he’s really, really sure he’s going to be drafted.

Alston still has plenty of time put his name in, as the deadline is April 21. So what all is going into this decision? He has no better advisor than his father, Derrick Alston Sr., the head coach of the Westchester Knicks of the NBA G-League. Dad presumably won’t look at his son’s game with rose-colored glasses and will give him solid advice. Broncos coach Leon Rice, meanwhile, would hate to lose Alston, but he won’t hesitate to boost him. “We’re in a bit of a holding pattern, because nobody can travel—nobody can do anything,” Rice told KTVB. “We’ll try to help him the best we can on going out and testing the waters.” Question is right now: are there any waters to test?

HANK’S HOMEWORK, ACCORDING TO KIESAU

Boise State offensive coordinator Eric Kiesau weighed in on Zoom with the rest of his colleagues at the end of last week. Kiesau has been blunt about what sophomore quarterback Hank Bachmeier has to get out of the spring of 2020. Only now, it has to be remotely, as he told Jay Tust and Will Hall. Kiesau‘s syllabus: “If you can condition your mind and get your mind ready to make decisions faster, so when you see it happening on the field, you can pull the trigger and get it done. Let’s use this time to our advantage, so we can get mentally ready.” That goes for all the Broncos quarterbacks, Kiesau was quick to add.

Hawaii, the Mountain West runnerup to Boise State last December, is missing all of spring football. It was supposed to begin today on the Manoa campus. And that puts a crimp in new coach Todd Graham’s plans for the Rainbow Warriors program, which revived its offensive firepower in the last two of Nick Rolovich’s four seasons. Before the sports shutdown 2½ weeks ago, Graham was laying out his agenda in a column by Ferd Lewis in the Honolulu Star-Advertiser. “Everybody gets excited about the offense—and that’s great,” Graham said. “(UH) has scored 40 points a game. That’s not the problem.”

The more pressing issues—“the ones that are going to determine our fate,” Graham insists—are defense and overall discipline as reflected in a high number of penalties. Lewis pointed out that Hawaii has ranked in the bottom 20 percent of the FBS in five of the past seven years in both categories. “The passion with which Graham has discussed them in an array of forums suggests they figure to be two areas of focus,” Lewis wrote. “In Graham’s avowed quest to pursue championships, that likely means going through Boise State to get there. And history suggests the Warriors are going to need a capable defense as full partner in the effort.” Keeping in mind that the Broncos have to go through Aloha Stadium this fall.

This Day In Sports…brought to you by FRANZ WITTE NURSERY…rooted here since 1971.

March 30, 1998: After coming through the Boise bracket unscathed a couple weeks earlier, WAC champion Utah makes it all the way to the national championship game. Kentucky ended the Utes’ run 78-69, but not until they had mowed down two No. 1 seeds, defending national champion Arizona and North Carolina (the Tar Heels were ranked first in the nation at the time). Utah was coached by Rick Majerus and captained by Michael Doleac. The Utes’ top player was first-team All-American and future NBA standout Andre Miller. 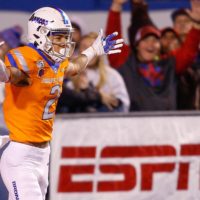 Lines in the sand for the First Responder Bowl