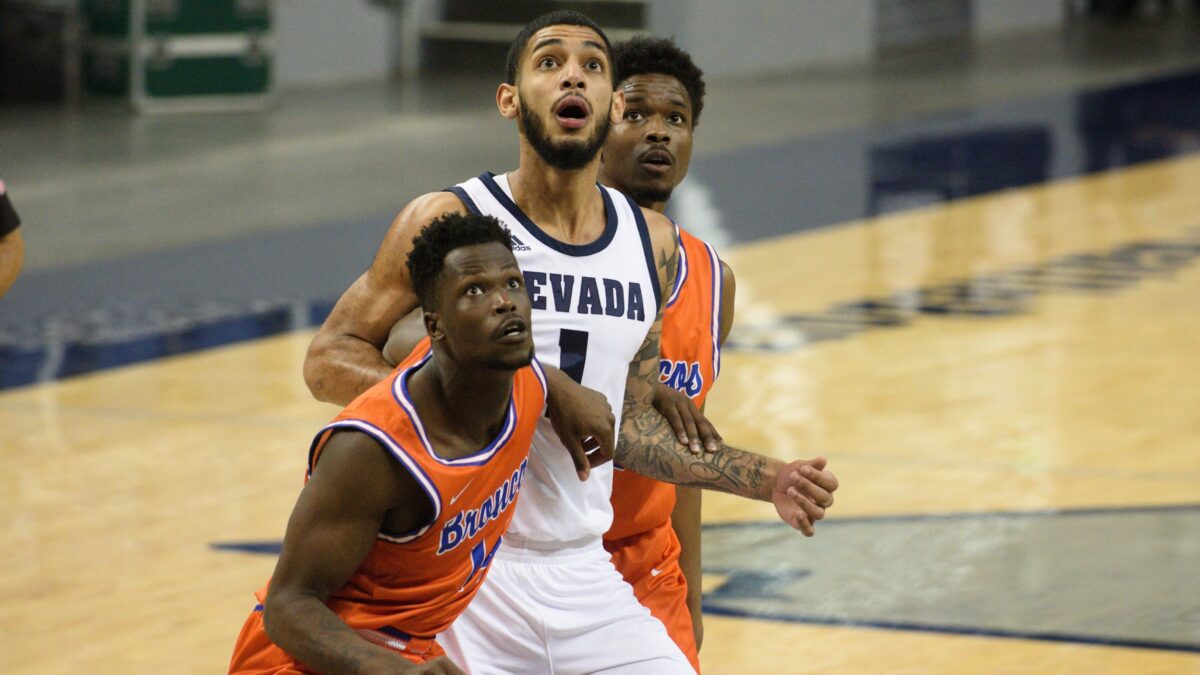 We divide the definition of “ending” into two pieces for Boise State men’s basketball: the ending of today’s Mountain West Tournament quarterfinal against Nevada, and the ending of the season. The Broncos dearly hope they don’t happen simultaneously. After the losses to San Diego State and Fresno State, the narrative went a little off the rails—to the point that people said this team can’t finish games. Well, Boise State did finish against Utah State three weeks ago, didn’t it? USU led by two at the half and twice took four-point leads in the second in Game 1, and the Broncos rallied to win. In Game 2, the Aggies built a nine-point lead early in the second half, and the Broncos rallied to win. So the history is there. Here’s where it isn’t: in nine trips to the tournament, Boise State has made it past the quarterfinals only three times.

Nevada’s Grant Sherfield is the Mountain West Newcomer of the Year, and he may have clinched the award five weeks ago against Boise State. Sherfield leads Nevada and is second in the conference in scoring with 18.0 points per game and leads the league in assists with a 6.2 average. In the sweep of the Broncos, Sherfield averaged 24.5 points and 11.0 assists over the two games. He dropped in the winning bucket in Game 1 to boot. They could not stop Sherfield. And if Boise State can’t do it today in the Mountain West quarterfinals, it’ll be tough sledding. Certainly the Broncos have something special schemed up. They may or may not have Abu Kigab available to help execute it.

It’s simple. When Derrick Alston Jr. is on, Boise State usually wins. Not always, but usually. Alston couldn’t will the Broncos past San Diego State in Game 1 two weeks ago despite his 29 points. He was not on in the two losses since, combining for 19 points on 6-for-28 shooting (2-for-19 from three-point range). Big-picture Alston is needed today against Nevada. During Mountain West play, he ranked in the top four in the league in scoring, field goal percentage, three-point percentage and free throw percentage. Alston is the only player in the Mountain West to rank in the top 10 in each. Alston’s 11 20-point games in Mountain West play were tops in the conference. He scored 23 and 17 points in the two losses at Nevada in early February.

EVANS HOPES TO GO OUT ON TOP

The last Boise State “super-senior” to go before the media last week was Octavius Evans, who has one season left to become the upper-echelon Bronco everyone envisioned. The journey begins in earnest tomorrow with the start of spring football. Evans could have easily gone the transfer portal route after the ups and downs he’s experienced in his four years. It happened again last fall, when—after a touchdown catch at Air Force—Evans disappeared from the depth chart. He said he took some time away from football for “personal matters” and to “get his mental health right.” Evans is rejuvenated now and wants to finish his career “having fun on the field with my friends.” He and CT Thomas came into the program together as true freshmen in 2017 and pulled in 15 catches apiece. But their paths have diverged since.

It’s a strange season, but it’s season. And you’ll probably say “time flies” when I tell you that this compacted spring schedule marks the seventh season since College of Idaho reinstated football. Coach Mike Moroski has been at the helm all the way through, and he’ll be guiding the Yotes Saturday as they host Montana State-Northern in Caldwell. These are the best of times for Yotes football—including the 69 seasons before the program went on hiatus in 1977. C of I has won its past 16 regular-season games and has won nine straight at Simplot Stadium. The Yotes have been waiting 15½ months to keep this thing going.

A ‘MAJOR’ FOR MERRITT, KIND OF

The Players Championship is often called golf’s “fifth major.” Troy Merritt is in the field, and he should be well-rested. The former Boise State star and Meridian resident finally got some time off the past two weeks after six straight PGA Tour events to begin the 2021 portion of the season. This will be the sixth time Merritt has played The Players. He made the cut in his first three tries—and missed it in his last three. Merritt was entered in the tournament a year ago, but yes, The Players was scheduled on the first weekend of the COVID shutdown. Its cancellation following the first round was one of the first things that rocked the sports world.

The Big Sky Women’s Tournament is down to the final two, and they happen to be top-seeded Idaho State and second-seeded Idaho. The Vandals trailed Montana State 38-32 at the half in the semis Wednesday night, but they started the third quarter on a 17-1 run and did not look back in an 80-64 victory. The Bengals got to the final by beating Northern Colorado earlier in the day, 65-55. The championship game will be played at noon Friday in Idaho Central Arena, and one way or the other, the state will be represented in the NCAA Tournament. On the men’s side, 11th-seeded Idaho hung with Montana to the wire in the opening round Wednesday before falling 69-64. The Vandals end their season at 1-21. Four men’s quarterfinal games are on the docket today, including Idaho State-Montana State.

LADO ON THE CUSP OF DIVISION I HOOPS

In 2020, former Vallivue High star Amoro Lado transferred from Chipola Community College in Florida to College of Southern Idaho, where he was reunited with Ryan Lundgren. It was Lundgren who lifted Egypt-born Lado out a troubled past in high school and developed him into a good basketball player and person. Lundgren is now an assistant at CSI, and Lado’s move to Twin Falls has worked out famously. He’s averaging 12.1 points per game and is shooting an eye-popping 49 percent from three-point range. The 6-2 guard tweeted Tuesday night that he is “Blessed to receive a D1 Scholarship from Portland St!” It’s unclear if it’s an offer or an acceptance, but either way it’s a great story.

March 11, 1987: Before what is still considered to be the loudest crowd in the history of what is now ExtraMile Arena, Boise State beats Utah, 62-61, in its first-ever NIT game. The Broncos had a one-point lead when Albert Springs drove the length of the floor in the final seconds and was fouled by Arnell Jones. With 10,000-plus fans screaming at him, Springs missed both free throws to preserve BSU’s victory. One of the Utes’ starting guards was Borah High grad Tommy Connor—son of former Bronco coach Bus Connor—who scored 13 points in a return to his home city.

The grain-of-salt poll out tomorrow

Ramifications of the Broncos’ injury rash