Everybody’s 0-0 when tournament time comes. San Diego State is now 1-0, awaiting Boise State tonight in the quarterfinals of the Mountain West Tournament in Las Vegas. Now we’ll see how much that “1” took out of the Aztecs. While the Broncos were resting yesterday, SDSU was rallying from a 21-point second-half hole before beating host UNLV 62-52 in overtime. The Aztecs had the same problem they’ve had all season—making baskets. They shot just 31 percent and managed just 50 points before the OT. In the last four games of the regular season, San Diego State scored 55, 55, 51 and 59 points while going less than 33 percent from the field. If the Broncos can bottle up that offensive performance against Air Force, and if the Aztecs don’t suddenly wake up like they did last night, you have to like the Broncos’ chances.

Boise State is knocking on wood as it looks at the tournament lineup. The Broncos posted a combined 8-0 record against the five teams on its side of the bracket—they were 4-6 against the five teams in the other half of the field. For what it’s worth, San Diego State will be a very different team than the one Boise State beat 78-66 in Taco Bell Arena in January. Malik Pope had an injured left knee and didn’t suit up for that game. Pope had 13 points and 12 rebounds against the Rebels last night. Matt Shrigley did play versus the Broncos but was hobbled and did not score; he is healthy now. Still, it seems the Aztecs’ wily old Steve Fisher is going to need a magic wand in this one. He’s the type of coach who can wield one—like he did versus UNLV.

Boise State may not travel stupendously well to the Mountain West Tournament, but there will be some familiar faces in the stands for the players. James Reid says his family has logged a combined 100,000 travel miles this season, from the season-opening tournament in Charleston to Eugene, and virtually everywhere in between. .Nick Duncan’s parents (“Mum and Dad”) traveled to Boise from Sydney for the San Jose State game and then Senior Night last week, and followed the Broncos down to Air Force last Saturday, where they were able to see his big game against the Falcons. Mr. and Mrs. Duncan are now in Las Vegas for the tournament.

In the other play-in games yesterday, Utah State and Air Force were the winners. The Aggies were tied with San Jose State 31-31 at halftime before putting up a Mountain West Tournament record 59 second-half points and rolling 90-64. The Falcons blasted out to a stunning 25-0 lead over Wyoming and won going away, 83-68. The other quarterfinal matchups today have top-seeded Nevada facing Utah State, second-seeded Colorado State meeting Air Force, and Fresno State taking on New Mexico in the No. 4-5 game.

Freshman Riley Lupfer was simply en fuego last night, scoring 15 of her 17 points in the fourth quarter as the Boise State women rallied past defending champion and top-seeded Colorado State 65-61 in the Mountain West Tournament. The Broncos now advance to tomorrow’s championship game against Fresno State, who upset UNLV 53-51 in the other semifinal last night. The win improved Boise State to 24-7 overall, tying the school record for wins in a season. Five times during the Broncos’ current nine-game winning streak, they’ve rallied for victory in the fourth quarter. If they can extend the run to 10, they’re going to the NCAA Tournament.

Every time College of Idaho got some separation last night, Dakota Wesleyan would make a run. But the game belonged to the Coyotes at the end, a 98-93 victory that moves them into the second round of the NAIA Division II National Championships in Point Lookout, MO. Aitor Zubizarreta led six C of I players in double figures with 21 points, as the red-hot Yotes shot 58 percent from beyond the arc. The Coyotes, winners of 10 of their last 11 games, now face top-ranked Union College of Kentucky tomorrow night. The Big Sky Tournament gets serious at the appropriately intimate Reno Events Center today, with fourth-seeded Idaho facing fifth-seeded Montana this afternoon. The Vandals lost to the Grizzlies 70-57 in Cowan Spectrum in January but bounced back to win 85-77 in Missoula later in the month.

A shocker from Boise State spring football, as senior linebacker Joey Martarano has announced he’s leaving the program to resume his pro baseball career with the Chicago Cubs organization. The multi-sport star out of Fruitland High had played minor league baseball in the summers during the early part of his college career, but nixed that last summer to concentrate on football. Martarano, coming off a broken leg suffered in last November’s home finale against UNLV, ends his career with 120 tackles and an interception. That leaves a big hole in a Bronco linebacker corps that lost Ben Weaver, Tanner Vallejo and Darren Lee off last year’s roster. Sophomore Tyson Maeva is suddenly in the spotlight at middle linebacker. Maeva had a strong finish to last season but is still an unknown as a prime time performer.

NFL free agency season begins at 2:00 this afternoon. And today looks like the first day of the rest of Kellen Moore’s football life, although it’ll still be awhile before we know what that really means. Tony Romo is poised to be released by Dallas, leaving Dak Prescott at the Cowboys’ controls and Moore behind him. Dallas owner Jerry Jones says he intends to keep the former Boise State great as Prescott’s backup and take advantage of Moore’s football IQ to get a young quarterback in the system and develop him. Jones calls Moore “a coach on the field” and adds, “With a signed Kellen Moore, then you might bring in a potential future quarterback. Kellen would satisfy that itch. There is a relationship. He fits here real well.” A new guy could be a long-term solution for Dallas—or trade bait.

Former Boise State stars Graham DeLaet and Troy Merritt are back on the PGA Tour beat this week, teeing off today at the Valspar Championship at Innsbruck Resort in Palm Harbor, FL. DeLaet has three top 10 finishes this season, with two of them in his past three tournaments. The Saskatchewan native is still seeking that elusive first tour victory, though. Merritt has made just one cut since the first of the year—in the Phoenix Open five weeks ago.

Less than three years after St. Petersburg almost landed the San Francisco Giants, Major League Baseball awards a franchise to Tampa Bay. Tropicana Field had already been built in St. Pete and was waiting for an occupant. The Devil Rays would begin play in 1998 and would make the World Series 10 years later as the Rays. But despite its general on-field success, Tropicana Field is an albatross, and Tampa Bay attendance remains among the worst in the big leagues. 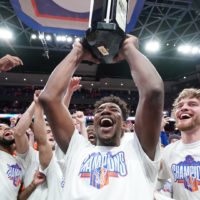