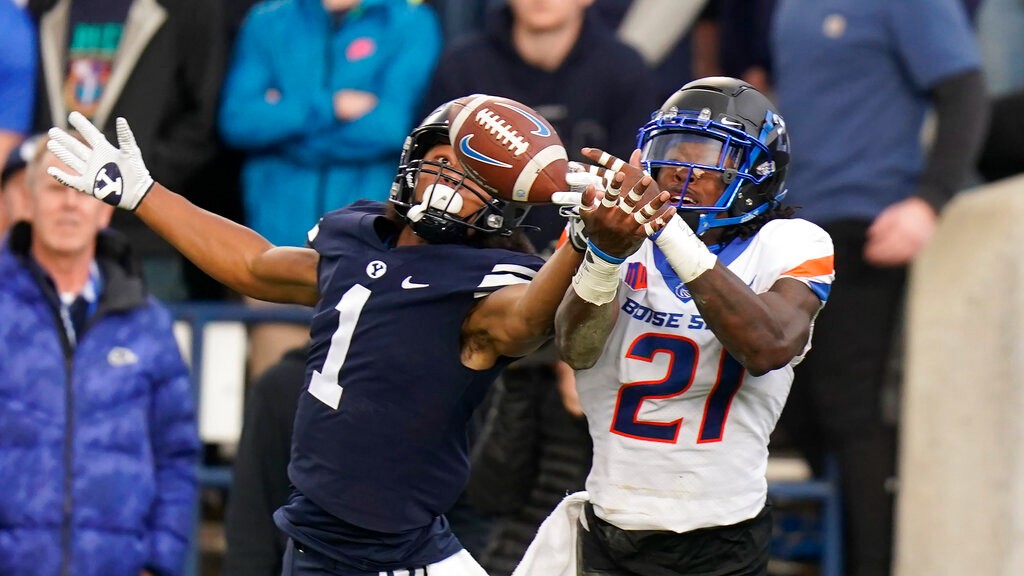 Talk from the Boise State staff this week centered around “reestablishing the foundation” after the Broncos’ first 3-4 start in 24 years. That takes leadership from coaches, but more importantly, players. Who has Boise State defensive coordinator Spencer Danielson leaned on to circle the wagons since the loss to Air Force? Not surprisingly, Kelaula Kaniho and Riley Whimpey. “A couple of guys that have just been awesome at holding the standard and continue to pull guys with them and understand that we’re gonna love you, but there’s a way we’re gonna do this,” said Danielson Monday. The more unlikely contributor? “One that’s really stepped up over the last couple of months is Tyreque Jones,” added Danielson. “It’s been cool to see him take steps in his leadership ability and how vocal he is on the field.”

I’ve been among those who have wondered why Boise State hasn’t put in Jack Sears for a series with a special package of plays, understanding that Hank Bachmeier has played well this year. There was pushback on that question from another reporter during the Broncos’ Monday press conferences. “I don’t think any quarterback likes to rotate,” said coach Andy Avalos. “It’s very hard on a quarterback.” And there was this from offensive coordinator Tim Plough: “If you try to change your identity and change what you’ve built, you’re going to have more problems than you started with.” You just wonder what’s going through Sears’ mind these days. He’s a talented guy, and he does have a super-senior year available to him next year if he chooses to use it (left over from the COVID-affected 2020 season).

The bottom line for Bachmeier: he’s No. 3 in the Mountain West in pass efficiency this season with a rating of 142.9 after not being predicted to be among the conference’s top four quarterbacks this season by Athlon. As if he doesn’t have enough to think about this week, Bachmeier made sure he added in this at the end of his session with the media on Tuesday regarding the tragic shooting Monday at Boise Towne Square. “I just wanted to send my deepest condolences to everyone who was impacted and affected,” said Bachmeier. “I just want to say thank you to the first responders who were there. My girlfriend was working at the Lululemon at the time. It was very scary for myself and her family.”

There’s only one team left in the Mountain West that has never beaten Boise State. Yep, it’s the one the Broncos face Saturday in Fort Collins. And Colorado State, 0-10 in this series, is champing at the bit to break through. The last two games between the Broncos and Rams in Fort Collins have been decided by a touchdown. But this is an elimination game for both teams in the Mountain West’s Mountain Division race, and the Rams have to hit the reset button after the self-destruction at Utah State last week. CSU coach Steve Addazio is playing the Lou Holtz sandbag card for this one. “I think this is without a question the most talented team, next to Iowa, that we have seen,” Addazio said Tuesday.

There’s only one way for Bronco Nation to look at it: David Moa has brought the New York Giants good karma. Moa made his NFL debut last Sunday, and he played seven snaps on defense and one on special teams. That’s not much—but hey, the Giants finally won their second game of the season, 25-3 over Carolina. The Giants roster shows Moa back on the practice squad right now. If that’s the case, beware of the game against the Chiefs next Monday night in Kansas City. One other former Boise State star of note: the L.A. Rams activated Donte Deayon off their practice squad for a reason. It wasn’t just to fill in on special teams. Deayon has played 127 snaps—88 percent of the Rams’ snaps on defense—in the two games he has played since his promotion, logging seven tackles.

Idaho tries to avoid a fifth straight losing season (and 20th of the 21st century) when it hosts Northern Arizona Saturday in the Kibbie Dome. The Vandals’ backs are against the wall, as they may be without their top two quarterbacks, Mike Beaudry and C.J. Jordan for the third straight game. That essentially puts their fate in the hands of their defense, which has yielded 105 points in the past two games. The Lumberjacks are 3-4 and may not be a threat to put up a lot of points (they’re scoring 23 per game). But three of NAU’s four losses this season have come versus ranked FCS opponents, and the ‘Jacks do have a win over struggling in-state Power 5 foe Arizona.

There are three former Boise Hawks in the World Series, and one of them is the most unlikeliest of subjects. Tyler Matzek is a pitcher for Atlanta who has come back from the brink several times. Matzek began the 2015 season with the Rockies before spiraling down to Boise because of control issues. In the last of his three games with the Hawks, he walked five batters and allowed six runs while recording just one out. The Rockies then sent him home to sort things out. Mission accomplished (finally) the past two seasons in Atlanta.

Matzek, now one of baseball’s most dominant relievers, tossed two perfect innings and struck out the side in a tense seventh last Saturday to get the victory in the pennant-clinching win over the L.A. Dodgers in the NLCS. He went 1 1/3 innings as a setup man Tuesday night in his World Series debut, allowing three hits and one earned run in the Braves’ 6-2 win over the Astros. Houston has two former Hawks on its roster: Marwin Gonzalez, who was just added to the roster Tuesday, and reliever Brooks Raley, who held Atlanta hitless through the final 1 2/3 innings of Game 1

October 27, 2011, 10 years ago today: In what is called the best non-clinching Game 6 in World Series history, the Texas Rangers twice reach the final strike for their first world championship. And each time—once in the bottom of the ninth inning and once in the bottom of the 10th—the St. Louis Cardinals rallied from a two-run deficit to tie. David Freese, who had saved the Cardinals with his two-out, two-strike, two-run triple in the ninth, won the game with a solo home run to lead off the bottom of the 11th. That forced Game 7 the next night, with the Cardinals cruising to a 6-2 victory and the Series title.

The next “biggest game ever” on the blue

Boise State football: As much as we hate to say it…