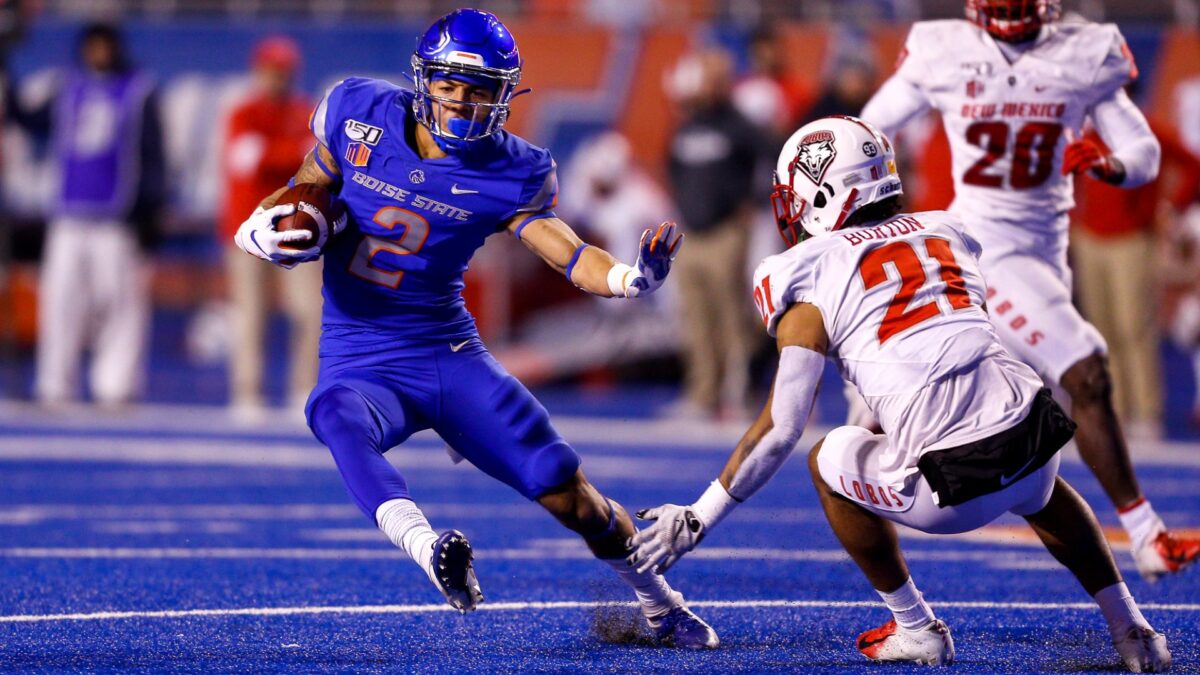 The top of the Boise State food chain at wide receiver devoured Utah State last Saturday, as Khalil Shakir was as advertised. Shakir had seven catches for 123 yards (tops in the Mountain West in Week 1) and two touchdowns. He also contributed three rushes for 34—for a total of157 all-purpose yards—in the 42-13 rout. Fellow starters CT Thomas and Octavius Evans, the seniors who came in together as true freshmen in 2017, added two receptions apiece.

Stefan Cobbs, who many liked as a breakout at wideout this season, had two touches in the game and put together a couple of great runs on a nine-yard reverse and an eight-yard pass from Hank Bachmeier. It’ll be interesting to see how Broncos offensive coordinator Eric Kiesau works in the other wide receivers in what is a very deep group. Shea Whiting, Boise State’s 2019 Offensive Scout Team Player of the Year, did get into the game, but Billy Bowens and Khyheem Waleed did not. That’s a lot of talent waiting to happen.

Boise State coach Bryan Harsin outlined a Hank Bachmeier report card of sorts at his Monday press conference. Statistics aside (and they were good), Harsin went right to one of his offensive bottom lines. “We took care of the ball, which is good,” he said. Bachmeier went interception-free and did not fumble (nor did any of his teammates). “He had really good urgency in his drops—made good decisions,” said Harsin. He pointed to two plays in particular: a throw-away on a play gone bad and a read that resulted in a touchdown, both during the Broncos’ two-minute drill at the end of the first-half. Bachmeier was looking for Riley Smith but then saw George Holani open in the flat. That was the catch that Holani turned into a 17-yard TD. “The check-down was the answer,” Harsin said.

Something’s gotta give when Boise State goes to Colorado Springs for Halloween. Something already gave for Air Force last Saturday. The Falcons’ nine-game winning streak, which had been the second-longest in the nation, is kaput following their surprising 17-6 loss at San Jose State. Air Force has, however, won nine consecutive home games, a streak dating back to November of 2018. It’s the ninth-longest active home streak nationally (the Broncos have won eight in a row in the blue turf). Boise State carries a 10-game Mountain West winning streak into Falcon Stadium, the third-longest active conference run nationally and longest by the Broncos since they joined the league in 2011.

VALLEJO AS ‘NEXT MAN UP’

Whatever happened to Tanner Vallejo in the NFL? We found out Sunday night, as Vallejo played a key part in Arizona’s 37-34 overtime comeback win over Seattle. Late in the fourth quarter, an injury sidelined starting Cardinals linebacker Jordan Hicks, and on came Vallejo. With a minute left in regulation, Vallejo made a monster stop on the Seahawks Carlos Hyde for no gain on a third-and-two. Seattle punted, and the Cards marched down for a game-tying field goal to send the game into OT. According to AZCardinals.com, “ Vallejo was given an 85.8 overall grade on his 18 snaps. “Tanner is a guy who doesn’t get a lot of reps in practice,” coach Kliff Kingsbury said. “Week in and week out, he knows it like he’s a starter. He prepares like he is a starter. You see that third-and-2, if they get that, they win the game.”

Boise State has found out over the years that life isn’t always fair. Unless the Broncos men’s hoops team is a “TBD,” this is one of those cases. With ESPN having abandoned the Wooden Legacy Classic in Orlando, CBS Sports reports that Kansas is heading to Fort Myers, FL. The Jayhawks were to have faced Boise State in prime time on college basketball’s opening night, but now a KU matchup against Gonzaga is in the works. According to a Matt Norlander tweet, “Fourth team is to-be-determined, but plan is then Auburn-Gonzaga would play Nov. 27, with Kansas playing TBD team that date too.” C’mon, TBD.

October 28, 2012: The San Francisco Giants complete a four-game sweep in the World Series with a 4-3 victory over the Detroit Tigers in 10 innings. It was the Giants’ second world championship in three years after having never won the Series in their first 50 seasons following their move to California from New York. The Giants had to win three straight elimination games at Cincinnati in the National League Divisional Series—then had to do the same thing against St. Louis in rallying from a three games-to-one deficit in the NLCS. But they dominated the Tigers in the World Series.

Horton plays through a different pain