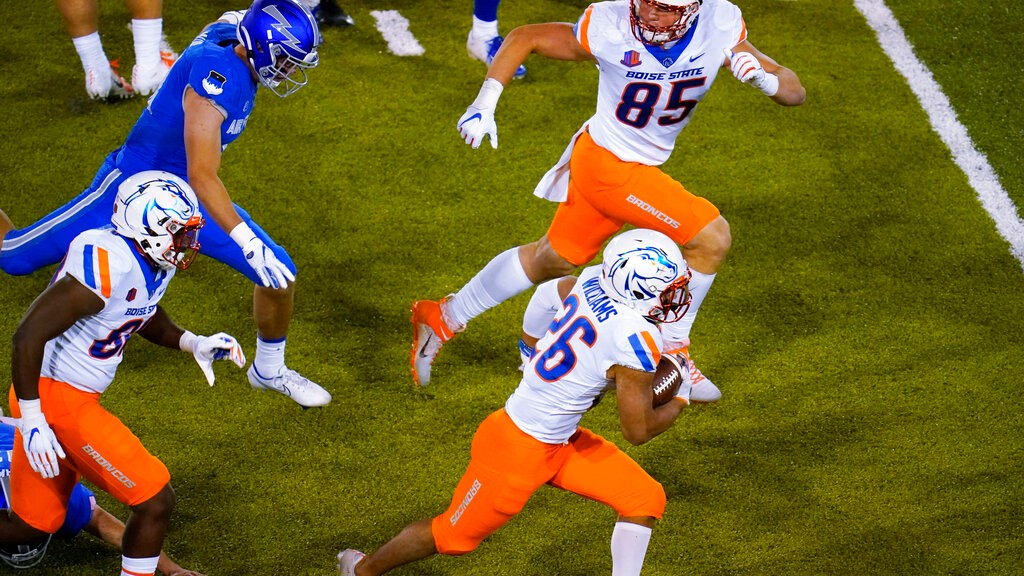 Maybe Atlanta drafted Boise State’s Avery Williams as a player-coach Saturday. As KTVB’s Jay Tust noted, Williams prepared for the NFL Draft this spring by watching video of the special teams units of teams that wanted to talk to him, and then sharing his input. That could have been worth a two-round bump up to the fifth round for a guy who was on the draft bubble before the Broncos’ Pro Day and didn’t even receive a symbolic invite to the NFL Combine. Williams’ leadership skills were evident from the time he set foot on campus as a walk-on. When he was named a defensive captain in the 2017 Spring Game—before he had even been awarded a scholarship and before his explosive debut against Troy that September—I vowed to make a note of that and see what happened. And I can’t wait to see what happens next.

Here’s the stats ladder ahead for John Bates as he settles in as a fourth-round draft pick of the Washington Football Team. Bates is the fourth Boise State tight end to be drafted in the first seven rounds of the NFL Draft. Among his predecessors, Jeb Putzier is the king, having logged 96 catches for 1,251 yards and three touchdowns in his eight-year NFL career. Derek Schouman had 27 receptions for 275 yards and one TD in four seasons.

The first tight end to be drafted in the seven-round window was Dave Stachelski in 2000. Stachelski spent two seasons with New Orleans and had one catch, but he was the first former Bronco to score a touchdown in a playoff game, on a two-yard reception in 2001. We shouldn’t forget Richie Brockel here. Brockel went undrafted in 2011 but worked his way into the NFL. Brockel was mostly a fullback with the Carolina Panthers and had four receptions for 25 yards and rushed four times for 13 yards and a touchdown in five NFL campaigns.

How about that. The Mountain West had only three players taken in the NFL Draft this year, and two of them were Broncos. The only other conference player selected (and the first one) was San Diego State cornerback Darren Hall, earlier in the fourth round to Atlanta. So Williams will have Mountain West company—and competition—with the Falcons. You can point to super-seniors returning as a factor in the league’s weak draft, but consider this: the rival American Athletic Conference had a record 19 players chosen. Meanwhile, Boise State still has the most NFL Draft picks among the Group of 5 this century, with 40.

The weekend started with a pair of Boise State player personnel items. First, the Broncos confirmed that because running back George Holani played in only four games last season, he preserved the redshirt year he hasn’t used yet. Combine that with the extra season granted by the NCAA due to COVID, Holani has as many as four seasons left at Boise State, with three to play. Of course, he may not take advantage of all of those, especially if a couple more 1,000-yard seasons are in the offing. The NFL might be too much of a temptation. But if Holani does play it out, he could threaten Cedric Minter’s school career rushing record of 4,475 yards.

Boise State also announced that the 2021 recruiting class wasn’t yet complete. The Broncos added Andrew Simpson, an outside linebacker (and probable edge rusher) out of St. John Bosco High in Bellflower, CA. You’ll recognize that as the alma mater of Holani—and the school at which Boise State’s first 2022 commit, quarterback Katin Houser, plays. Simpson originally signed with Kansas before being released from his Letter of Intent. During California’s shortened prep football season this spring, Simpson made 35 tackles, forced two fumbles, recorded one sack and notched three pass break-ups as a senior.

It was the best performance of the season for Troy Merritt—a tie for eighth at the Valspar Championship Sunday in Palm Harbor, FL. The former Boise State star was consistently solid over the four rounds, shooting 68-69-68-70 to finish nine under par. Merritt earned $201,825 for his efforts. The golfers at Merritt’s old school were contenders for the Mountain West championship over the weekend. In fact, the Broncos led by a stroke going into the final round at Tucson National Golf Club. But New Mexico and Nevada were 19-under and 17-under, respectively, on Saturday, while Boise State was one-under and fell to fifth place. The Broncos’ Hugo Townsend was part of a four-way playoff for medalist honors and finished fourth.

May 3, 1997: Idaho native and former Les Bois Park jockey Gary Stevens wins his third and final Kentucky Derby, riding Silver Charm to victory at Churchill Downs. The one-time Capital High wrestler would take the Preakness Stakes aboard Silver Charm two weeks later, one of three times he won two legs of the Triple Crown in the same year. Stevens retired from horse racing in late 2005, but he resumed his career in 2013 and won the Preakness and Breeders Cup Classic that year at the age of 50. By the way, Silver Charm was the first of trainer Bob Baffert’s seven Derby winners, with the latest, Medina Spirit, winning on Saturday.