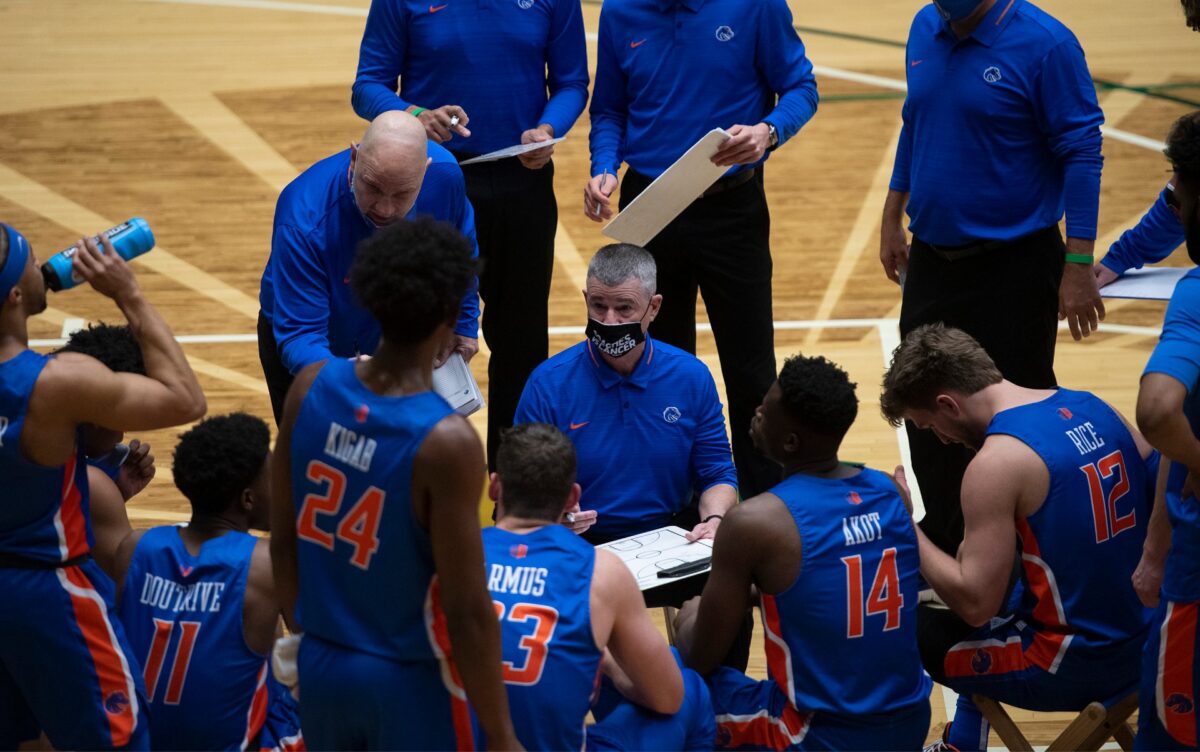 Boise State’s 13-game winning streak is over after the Broncos were run out of Moby Arena Wednesday night. Colorado State got hot in the first half and led by 15 points at the half, and as good as the Rams are, it was probably going to be enough. But CSU had a big finish too, routing Boise State 78-56 in Fort Collins. It was the Broncos’ worst Mountain West loss ever. They didn’t get their coveted NCAA Quad 1 win—Colorado State, on the other hand, earned its third. Boise State got the lead down to five points twice in the second half when Derrick Alston was scoring most of his 20 points, but the team went back into the freezer after that while the Rams kept making shots. The Broncos’ Top 25 dreams will have to wait. It’s not over, but it’s not going to happen anytime soon. All they can do is give it another shot Friday night.

Colorado State shot 62 percent in the first half and 56 percent for the game, while Boise State lagged at 38 percent and made just five of it 23 three-point attempts. Most concerning, though, was Colorado State’s thorough domination on the glass. The usually steely Broncos left some toughness in the locker room and were not competitive on the boards, as they were outrebounded 39-24. CSU’s big-bodied David Roddy, the one-time high school quarterback who looks like a linebacker, was a monster in both categories. Roddy scored 27 points and pulled down 15 rebounds. His three-pointer with just under four minutes left was the dagger, putting the Rams up by 16. What to do about Roddy in Game 2?

HIS DUNKS MUST MAKE A DIFFERENCE

Alston has made the Dr. J cut for the second straight year, named Wednesday as one of 10 finalists for the 2021 Julius Erving Small Forward of the Year Award. It’s named, of course after the 1993 Hall of Famer and former Philadelphia 76er. Alston has scored in double figures in 13 out of 15 games this season, including eight 20-point performances. He’s in formidable company here, including Gonzaga’s Corey Kispert and San Diego State’s Matt Mitchell.

TOP OF THE PODIUM

Boise State’s Avery Williams has been named the 2020 winner of the Jet Award that goes to the nation’s top return specialist. The honor is named after Johnny “The Jet” Rodgers, the 1972 Heisman Trophy winner who turned in some of the most dazzling returns in college football history for Nebraska. Williams was already a Consensus All-American as a kick returner/all-purpose player. He was also the Mountain West Special Teams Player of the Year. Williams elected to pass on the extra year of eligibility granted by the NCAA due to COVID-19 and is pursuing his NFL dreams.

TOP OF THE GROUP OF 5

Former athletic director Mark Coyle struck gold with home-and-home series against Power 5 schools during his three years at Boise State, but those are hard to come by anymore as the big programs circle the wagons. Contracts with elite Group of 5 schools are the next-best thing, and the Broncos have struck a deal with Memphis of the AAC. Boise State will visit the Tigers at Liberty Bowl Memorial Stadium in 2030, and the Broncos will host Memphis on the blue turf in 2031. The Tigers have gone 67-23 since 2014—they represented the Group of 5 in the New Year’s Six in 2019, falling 53-39 to Penn State.

The much-anticipated game between Boise State and UCF in Orlando on September 4 will feature a level playing field in one respect. Both head coaches will be making their debuts for those schools, as the Broncos’ Andy Avalos will be facing somebody new for the Knights. Josh Heupel left UCF Wednesday to become the new head coach at Tennessee, joining his former athletic director, Danny White. Heupel was 28-8 with the Knights, including a 12-1 mark in his first season—UCF’s only loss was to LSU in the Fiesta Bowl. It was supposed to be Heupel against the Broncos’ Bryan Harsin in the opener. Interestingly enough, Heupel and Harsin will not meet in the SEC this year, as the Volunteers and Auburn aren’t scheduled to play each other.

Next up for Troy Merritt is the Farmers Insurance Open at Torrey Pines in La Jolla, CA. The Meridian resident and former Boise State star missed the cut last week at the Desert Classic (now known as The American Express). And the Boise Hawks have a schedule from their new home, the Pioneer League. While they’ve lost their Major League affiliation, the Hawks have gained 20 games. The 96-game slate will begin on the road on Saturday, May 22 at Ogden. The home opener is set for Wednesday, May 26, versus Grand Junction, the first of 48 home games. The season ends on Labor Day. The long grind comes with this silver lining: every Tuesday is designated as an off-day.

Gordy Presnell’s young Broncos have hit a heck of a rough patch. The Boise State women were thumped 71-51 Wednesday by Colorado State in ExtraMile Arena, breaking a nine-game home winning streak and a seven-game streak over the Rams. The Broncos shot an abysmal 28 percent from the field and scored only 16 points in the first half—and two points in the second quarter. Boise State will try again versus CSU on Friday. For the University of Idaho men, it’s been a season-long ordeal. The Vandals are 0-11 as they go into their two-game Big Sky series against Weber State. Idaho announced Wednesday that 7-foot sophomore center Jack Wilson has left the program. Wilson transferred from Oregon State two years ago.

January 28, 1990: The biggest blowout in Super Bowl history, as the San Francisco 49ers rout the Denver Broncos 55-10 in the 24th edition of the championship game. The title was the second straight for the 49ers and their fourth overall. Joe Montana called signals for all four, and he was at his best in this one, throwing five touchdown passes—three of them to Jerry Rice. For Denver quarterback John Elway, the wait continued. Elway would finally win the first of his two Super Bowl rings eight years later.