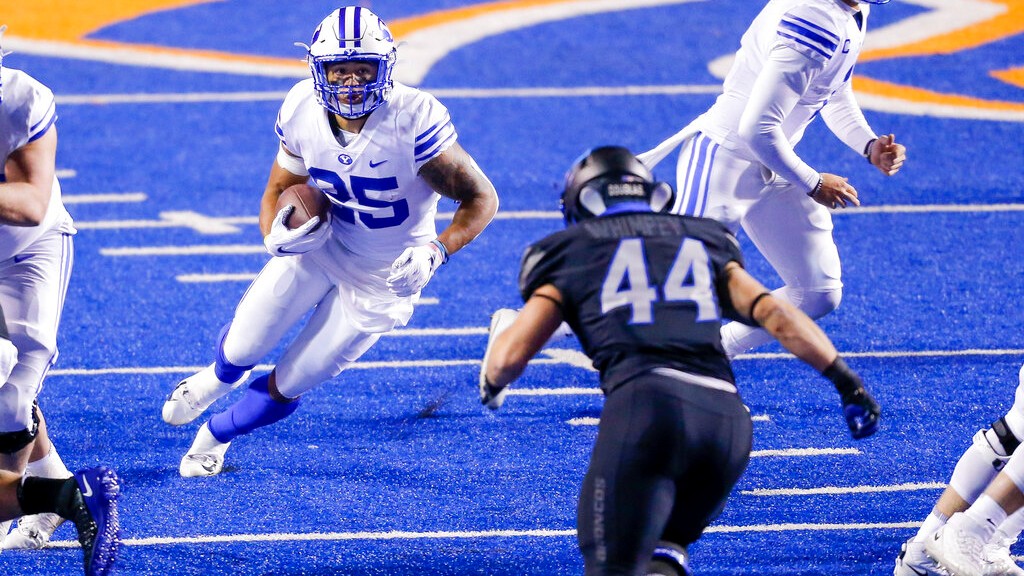 Prater & The Ballgame spent a considerable amount of time on this subject Monday on KTIK, so I thought I’d weigh in. Is it time for BYU to return to the Mountain West now that there is no clear path to the College Football Playoff (if the proposed 12-team format sticks)? It’s complicated. Without a conference, the Cougars would have to go undefeated to have a sniff at an at-large CFP berth. If they could do it, they’d deserve it. This year, for example, BYU has seven Power 5 opponents on its 12-game schedule (plus Boise State). But for that very reason, the odds are slim.

The Cougars need to go where they can win a championship. The albatross is the BYU fan base. A move to any Group of 5 conference—Mountain West or no Mountain West—would be seen as an admission of defeat, 10 years after the hated Utah Utes left the Cougars in the dust and moved to the Pac-12. Cougars fans do not ever want to feel as if they’re playing second-fiddle to the Utes. Despite the bitter divorce with the conference in 2011, MW commissioner Craig Thompson has left the door open. Pride will keep BYU from walking through it.

With Julio Jones gone, Atlanta had plenty of salary cap money to use on its rookies on Tuesday. Boise State alum Avery Williams has signed his rookie contract with the Falcons—four years, $3.7 million with a $240,000 bonus. Much of the deal is contingent upon his making the roster every year. But it’s looking good right now, as Williams is listed as a backup cornerback and the No. 1 punt returner and kickoff returner on one Atlanta depth chart. According to the Atlanta Journal-Constitution, Williams drilled mainly at corner during the Falcons’ offseason program and mandatory minicamp.

TWO DAYS OR FOUR THIS WEEK FOR TROY?

Troy Merritt is gearing up for his third career U.S. Open, set to tee off Thursday morning at Torrey Pines near San Diego. It might be a reach, but you could say Merritt is trending in the right direction in this event. The former Boise State star didn’t make the cut at his first U.S. Open in 2017, but he did last year at Winged Foot. If Merritt can get that far—and then play the weekend like he did in May—it could be a special four days. This is his sixth career major and his third in the past 11 months. Merritt’s best finish in a major was a tie for 42nd at the 2016 Masters.

THE BALL’S IN ALSTON’S COURT

Turns out the NBA released its list of invitations for the NBA Combine ahead of the G League Elite Camp to be held this weekend in Chicago. Former Boise State star Derrick Alston Jr. is headed for the G-League event, but he not slated for the Combine—yet. Alston was not among the 69 invitees, but according to the NBA’s release, “A select number of standout players from the G League Elite Camp will be invited to participate in the NBA Draft Combine 2021.” So the pressure is on for Alston to impress at the G League event. San Diego State’s Matt Mitchell and Jordan Schakel weren’t on the Combine list either. The only Mountain West player who made that cut was Utah State’s Neemias Queta.

The Boise Hawks are rightfully refreshed after their day off, and they take their first two-game win streak of the season into a three-game series in Idaho Falls beginning tonight. This certainly isn’t what I envisioned for the Hawks season when manager Gary Van Tol put a pro team together from scratch this spring. Boise is sporting the worst record in the Pioneer League at 6-15, mainly because of an astronomical 8.55 ERA from its pitching staff. Credit where credit is due, though: former Northwest Nazarene hurler Zach Penrod has been solid, posing a 3.55 ERA in four starts with a strikeout-to-walk ratio of 37-7. And keep in mind it’s a 96-game season this year—21 games down and 75 to go.

LEWIS TALKS ABOUT TOKYO IN CONNECTICUT

The Voice of Boise State Olympic Sports, Chris Lewis, gets a well-deserved international assignment this summer. Lewis tweeted early this month that he’ll be handling table tennis for NBC Sports during the Tokyo Olympics, albeit it from NBC’s broadcast headquarters in Stamford, CT. BoiseDev.com posted an interview Tuesday with Lewis, who is understandably excited. “This is why you dream of doing play-by-play,” Lewis told BoiseDev. “It’s why you do play-by-play when you are ten years old playing Madden while your friends are playing so you can get assignments like this.” Lewis will make it clear out of the gate that this is not ping-pong.

June 16, 1999: Chris Childs becomes the first former Boise State player to appear in the NBA Finals in Game 1 of the New York Knicks’ series against the San Antonio Spurs. Childs, the Knicks’ starting point guard, scored just two points with three assists and totaled only 12 points in the Finals as the Spurs won the NBA championship four games-to-one. The 1989 Big Sky Player of the Year was in the fifth season of a nine-year NBA career, by far the longest of any ex-Bronco.