Boise State is now halfway through the Mountain West schedule, with the stretch beginning tomorrow night at Air Force. So what’s lies ahead on the docket? The Broncos will have a chance to recharge after the trip to Colorado Springs, as next week they’ll get their midweek bye. They have four games left at home and five on the road. The toughest at Taco Bell Arena is obviously Nevada, a game that’s magnified now as the teams are again separated by just one game. Boise State’s biggest challenge on the road would appear to be at San Diego State. Of course, here we go again. Everyone wants to handicap the Broncos’ chances of an at-large berth in the NCAA Tournament. But as soon as they focus on that, somebody else is going to focus on them and knock them off. The Falcons have shocked them before.

The talk earlier this week was about Boise State’s three-point frustrations on the road. That was before the Broncos’ glorious 18-trey night at home from beyond the arc in the 94-71 romp over San Jose State. But Boise State hit the most three-pointers in a game in school history and tied the Mountain West record by raining 20 of them upon Air Force last March in a 98-70 win—on the road. The players responsible for 13 of the three-balls, James Reid and Nick Duncan, have both graduated, though. The guy everybody is curious about now is Justinian Jessup. As a true freshman last year at Air Force, he went 3-for-4 from deep. Jessup has struggled mightily of late, but he did ultimately drain a couple of threes on Wednesday. And his family will be out in force at Clune Arena, as he hails from Longmont, CO.

There was another stat that stood out for the Broncos Wednesday night. Their assist-to-turnover ratio was an amazing 25 assists to only nine turnovers. They were whipping the ball around as well as at any time this season. “Elite possessions,” coach Leon Rice calls them. The 25 assists were the most for Boise State in five years. And to demonstrate that Chandler Hutchison takes what all those collapsing defenses give him, he dished out six assists against the Spartans.

The Mountain West, Fresno State and Air Force have come to an agreement on how to re-schedule the games postponed last weekend due to the government shutdown. On the men’s side, the Bulldogs and Falcons will play in Colorado Springs on Monday, February 26. It’s as good a solution as possible for Fresno State, which was left to twiddle its thumbs in a hotel last Saturday when the Academy abruptly wiped out all of its athletic events. The Bulldogs have the weeknight bye that week, so even though the makeup game comes two days after a home game in Save Mart Center, it could be a lot worse.

Now that he’s aboard (although he won’t truly be until February 7), what are the goods on Boise State commit Riley Smith? The Jacksonville quarterback was on Idaho SportsTalk yesterday and said he didn’t stray from Boise State despite a late scholarship offer from Pittsburgh. The key was the home visit earlier this week from coach Bryan Harsin and offensive coordinator Zak Hill. “You can tell just when they walk in the room the culture they present, and it’s something I want to be a part of,” Smith said . He’s expecting to redshirt his first year “and use Brett (Rypien) as a mentor.” Smith would then compete for the starting job next year. “Competition is something I feed off of,” said Smith, who’s fresh off a season full of that with Auburn signee Joey Gatewood at Bartram Trail High.

The reviews on Boise State’s Cedrick Wilson at yesterday’s Senior Bowl practices were a lot different than the ones we got on KTIK Wednesday from Pro Football Focus. Tampa Bay Times writer Greg Auman tweeted video of a touchdown pass on a slant from Wyoming’s Josh Allen to Wilson. Fantasy football writer Ron McCleese tweeted that Wilson was one of four Thursday standout performers at the North squad’s practice. And NFLDraftBible.com tweeted, “WR Cedrick Wilson, Boise St: Makes sharp turns/quick cuts due to body control/lightweight frame. Plucks the ball out of the air effortlessly + is on the go after the catch. Possesses fluid movement/excellent ball skills + ability to get open.” Now that’s the Wilson we know. The actual Senior Bowl game, an afterthought for scouts, kicks off tomorrow at 12:30.

The road to a division title clearly goes through Loveland, CO, for the Idaho Steelheads. After edging the Steelheads 5-4 Wednesday night, Colorado now boasts the best record in the ECHL at 29-7-4, with the two teams set to wrap up their series tonight and tomorrow. Then the Steelies and Eagles face off again in a six-game home-and-home set next month. Of course, what matters is what happens in the Kelly Cup Playoffs this spring. You can count on Colorado being there for the postseason, and it would take a collapse of major proportions for Idaho not to be there.

Other local pro notes for Friday: Troy Merritt had a decent start yesterday at the Farmers Insurance Open, shooting a one-under 71 on the South course at Torrey Pines. The former Boise State star needs to at least duplicate that today to make the cut. Uh, Merritt is one shot ahead of Tiger Woods. And one of the best tweets of the week comes from a former Bronco hoops star. “Hey guys, my name is James Webb III and I’m bored!” it said. Webb, who signed a two-way contract with Brooklyn last week, remains on the Nets roster at NBA.com. He hasn’t made his NBA debut yet, though. Brooklyn’s next game is tonight at Milwaukee.

And on with more hoops: Idaho had one of those out-of-sync experiences in Cowan Spectrum last night, falling 80-63 to Northern Colorado. Victor Sanders, with 26 points, was the only Vandal in double figures. College of Idaho is currently 17-5, and it would be shocking if the Coyotes didn’t come out of the weekend 19-5. The Yotes have a pair of home games against Walla Walla, which is 5-17, and 1-11 in the Cascade Conference. And, to be honest, it would be shocking if the Boise State women weren’t 13-8 after their home contest against Air Force tomorrow. The long-suffering Falcons are 1-17, and 1-11 in the Mountain West. The Broncos are coming off their stunning 112-point performance at San Jose State.

Jon Gruden coaches Tampa Bay to a 48-21 victory in Super Bowl XXXVII, defeating the team he had previously coached—and is now coaching again—the Oakland Raiders. The game pitted the Buccaneers defense, No. 1 in the NFL, against the league’s top-ranked offense from Oakland. Defense ruled, as the Bucs intercepted Raiders quarterback Rich Gannon five times and returned three of them for touchdowns. It was the last Super Bowl played in the month of January. 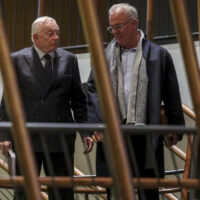